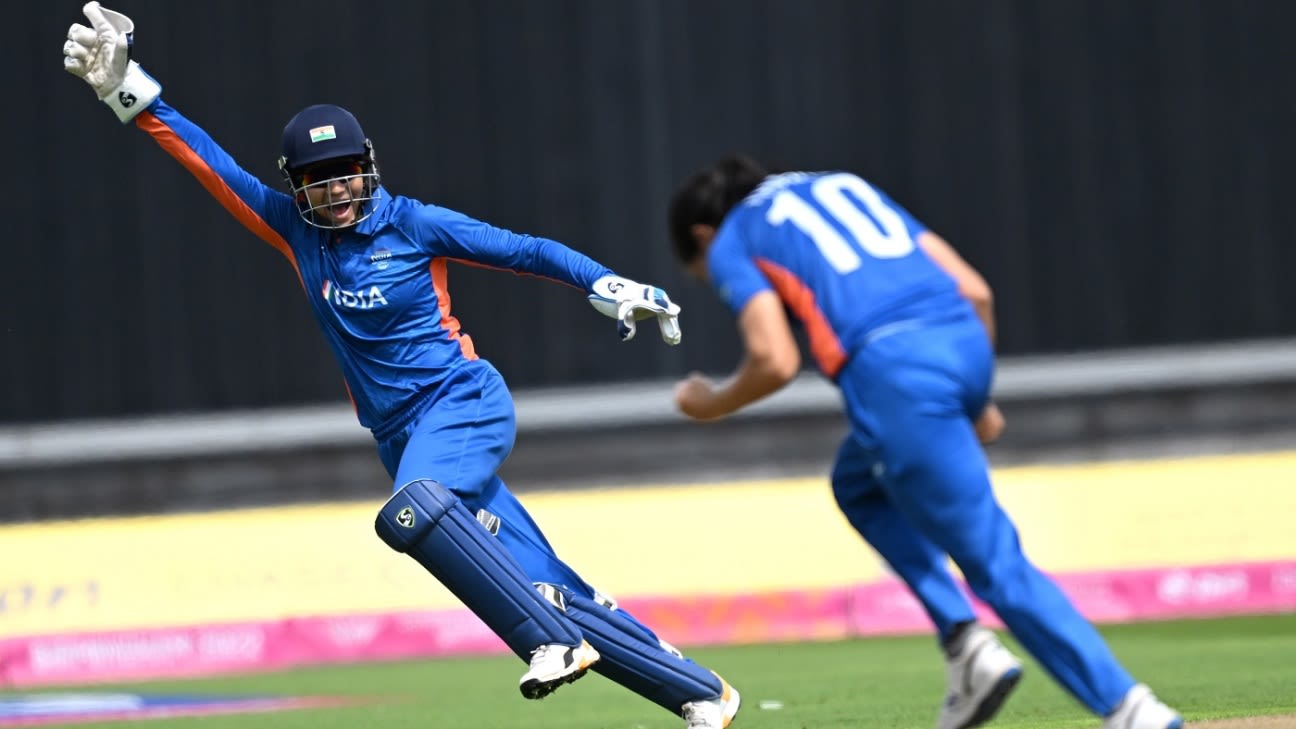 One day out of India’s semi-final against England at the Commonwealth Games, head coach Ramesh Powar attributed the chopping and changing of player roles – and team compositions – to the side being an evolving team. In the first three games, India have used all 15 squad members en route to the knockout stage.
Jemimah Rodrigues, who returned to the side on the Sri Lanka tour after missing out on the Women’s World Cup, batted at No. 5 throughout the three-T20I series and also in the Commonwealth Games opener against Australia. She then walked out at No. 4 against Pakistan with India on the cusp of the win before slotting to No.3 against Barbados. She made an unbeaten 56 – her first T20I half-century since November 2019 – to help India make the semi-final in a must-win game.
“We are an evolving team, and processes and plans will evolve,” Powar said on the eve of the semi-final. “We are not going to set one player at a certain place, and are trying to get the best out of them.

“As team management we felt Jemi is ready for this because she’s been playing in England for a while in the Hundred or T20s. So we thought we would take a chance on her and promote her.”

Rodrigues played for Yorkshire Diamonds in the Kia Super League in 2019, where she scored 401 runs – only second behind Danni Wyatt’s 466 – including a century and two half-centuries, striking at 149.62. In the inaugural season of the Hundred women’s competition, she finished on 249 runs – only ten shy of the leading run-getter Dane van Niekerk – at a strike rate of 150.90, hitting three half-centuries with a best of 92 not out.

“It’s an evolving process and we learn every day,” said Powar. “We don’t get carried away with performances or failures. We try and give them space and if someone is clicking we try and continue with that player.”

While India opted for Yastika Bhatia as their primary wicketkeeper in the squad and played her in the first two matches of the Commonwealth Games, Taniya Bhatia replaced in the XI against Barbados, scoring a laborious 6 off 13 balls. Yastika had kept wickets in the last two T20Is of the Sri Lanka series with Taniya not part of the squad.

Powar said that Taniya’s inclusion was to have their best wicketkeeper play in crunch situations, where the conditions can be tricky.

“When you come to a marquee tournament, you are ready with the players and all 15 are available. It is not a bilateral series where you give a chance to a player to see how she goes about the game,” Powar said. “We want to use whatever we have in our arsenal. We felt Taniya could be a game-changer as far as wicketkeeping is concerned because we have quality bowlers. Taniya has been very good with her keeping in the last so many years and that makes a difference.”

A day after sealing their semi-final spot, India, who are not staying in the Games Village, visited the Village to watch other sports and interact with players from other disciplines. They engaged in interactions with the Indian men’s hockey players PR Sreejesh and Manpreet Singh and also watched Murali Sreeshankar win silver in men’s long jump,

“It does give us goosebumps,” Powar said about the idea of ​​India winning a medal in cricket. “We were watching long jump of one of our athletes who got us silver. That gave us an impression that the boy was trying very hard.

“Our job is to go out there and try as hard as he did. We watched him achieve the silver medal live and will put our best performance forward to win a medal.” A win for India in the semi-final against England will assure them of a medal, while a loss would leave them vying for bronze.