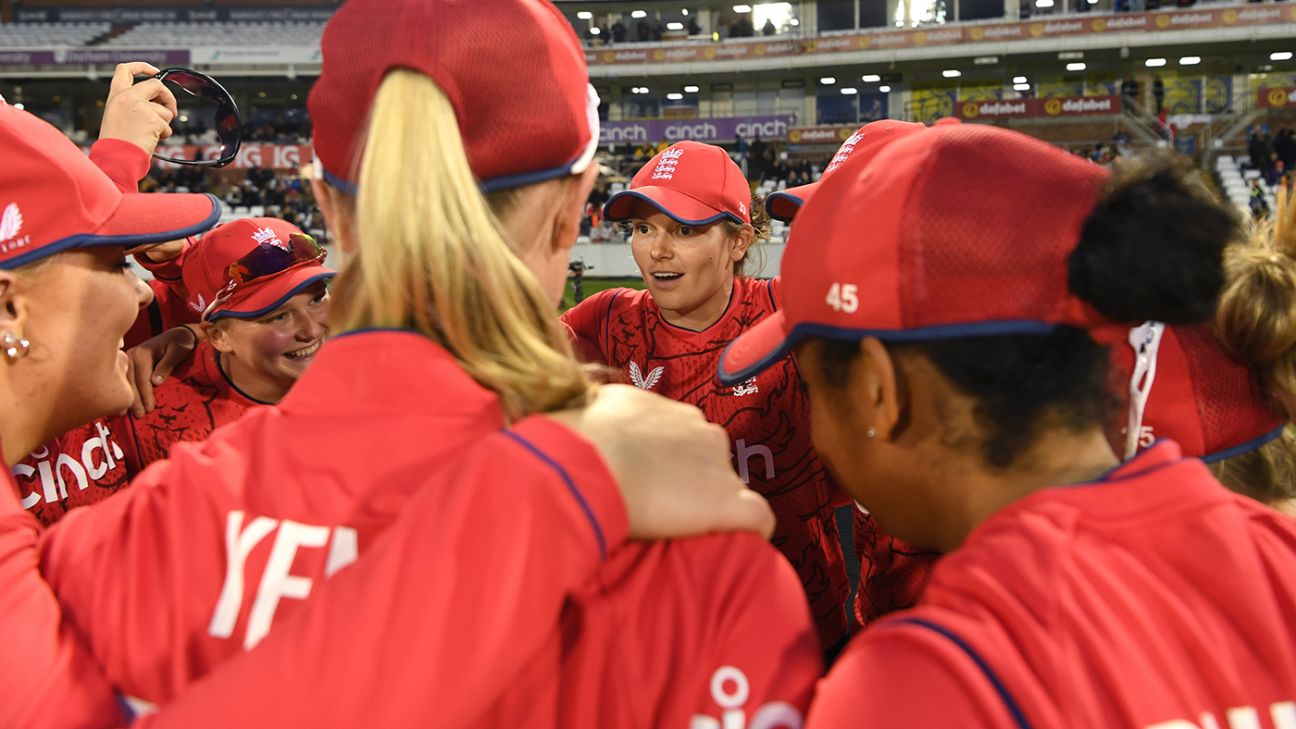 Amy Jones has admitted for the first time that captaincy doesn’t come naturally to her.
So when she was pushed for the role on the international stage because Nat Sciver opted to walk away for mental health reasons, Sciver initially helped convince her that she could.

“Certainly not something I’ve been quietly targeting for a while,” Jones said with a smile on the eve of Tuesday’s second T20 match against India in Derby. “But when I was chatting with Nat, kind of getting the impression that she might be going home, we had a conversation where we were like, ‘This could be you, Amy,’ and it was so hard.

“I would say on the pitch, definitely not something that comes naturally to me. I like to lead the pitch in my own way, how I go about things, but also when it comes to being vocal and the group. Whether it comes to speaking up or managing the game, it’s all new to me.”

But, after giving England an impressive nine-wicket win in the first match on a damp evening in Durham on Saturday, Jones – the wicketkeeper-batsman – is set to make his 150th appearance for England in Thursday’s third match in Bristol – admitted that he rather enjoyed himself.

“One of the most enjoyable things about the second night was how everyone came together,” she said. “They know it’s not natural to me, but everyone has been really supportive and just helped whenever they can. So it was, yeah, I would say I really enjoyed it.”

England announced last Thursday that Sciver had withdrawn from both white-ball series with India and returned home from the team’s camp in Durham to focus on his mental health and well-being. Sciver, who stood in for injured regular captain Heather Knight since July, said she was “very emotionally exhausted” after a busy nine months, which included the Ashes tour of Australia, the World Cup in New Zealand, a home series with the South . Africa and the Commonwealth Games in Birmingham, where the host nation finished a disappointing fourth.

“He is one of my closest friends as well as a teammate,” Jones said. “The first few days in Durham, she was clearly not herself.

“So when she decided with the help of our support staff that she shouldn’t be there, I think it was almost a relief for me as a friend to know that before she could go back home and fix herself. She was going to fix herself. She joins back with us, so it’s definitely the right decision for her and everyone behind that.”

Jones felt he had the full support of Sciver to take over the captaincy, as well as from Sciver’s wife Katherine Brunt, who is being rested from T20Is and the three-match ODI series with India.

“She was getting really confident, she said I would do a great job,” Jones said of Sciver. “And Katherine has also messaged me and she’s been very supportive. It felt like she thought I was the right person, which definitely gave me a little bit of confidence.”

Jones captained the Birmingham Phoenix through the inaugural season of the Hundred last year before the arrival of New Zealand captain Sophie Devine in the franchise this year.

“For me, it was challenging, purely because I had clearly done in a hundred years and there was nothing on either side of it, so it’s really unknown,” Jones said. “That’s what I was pushing to be at the forefront of the sport.

“It’s obviously a lot of responsibility and with a young side… I wasn’t sure some bowlers would need more help than them, but everyone really stepped up, knew their game, and it It was a lot easier than I thought.”

In the absence of three senior players, Jones was extremely impressed with her side’s performance on Saturday, most notably leg-spinner Sarah Glenn, who took a career-best 4 for 23, including Shafali Verma, Dayalan Hemlata and Harmanpreet in India’s top four. Three of them were involved. Kaur

“Leading in that, missing three key players for us, it would have been easier for us to go into our shell with a little less confidence in that first game,” Jones said. “It really felt like everyone came together and stood at a time where we could have gone the other way, so it was really enjoyable.

“It was definitely a challenge. I was very nervous. I think it was a lot of thinking for a few days and it was quite hard to pull it off. But now, after playing for the first time, I can relax.” I can learn a little bit more and know that we can get through a game and it’s made so easy with the help of the girls.”

Ellis Davidson-Richards was called up in the England squad as cover for all-rounder Sciver for the remainder of the T20I series. The names of the team and captain have not been decided yet for the ODIs starting in Hove on Sunday.

“I’m not sure I’ll throw my hat in the ring,” Jones said. “I think fifty overs is an all-out ball game. But, in saying that, obviously if they think I’m the right person for it then it’s something I can never turn down.

“I am happy to focus only on T20s for now. As always, I would never turn down an opportunity like this, but I am definitely doing a little stand-in.”