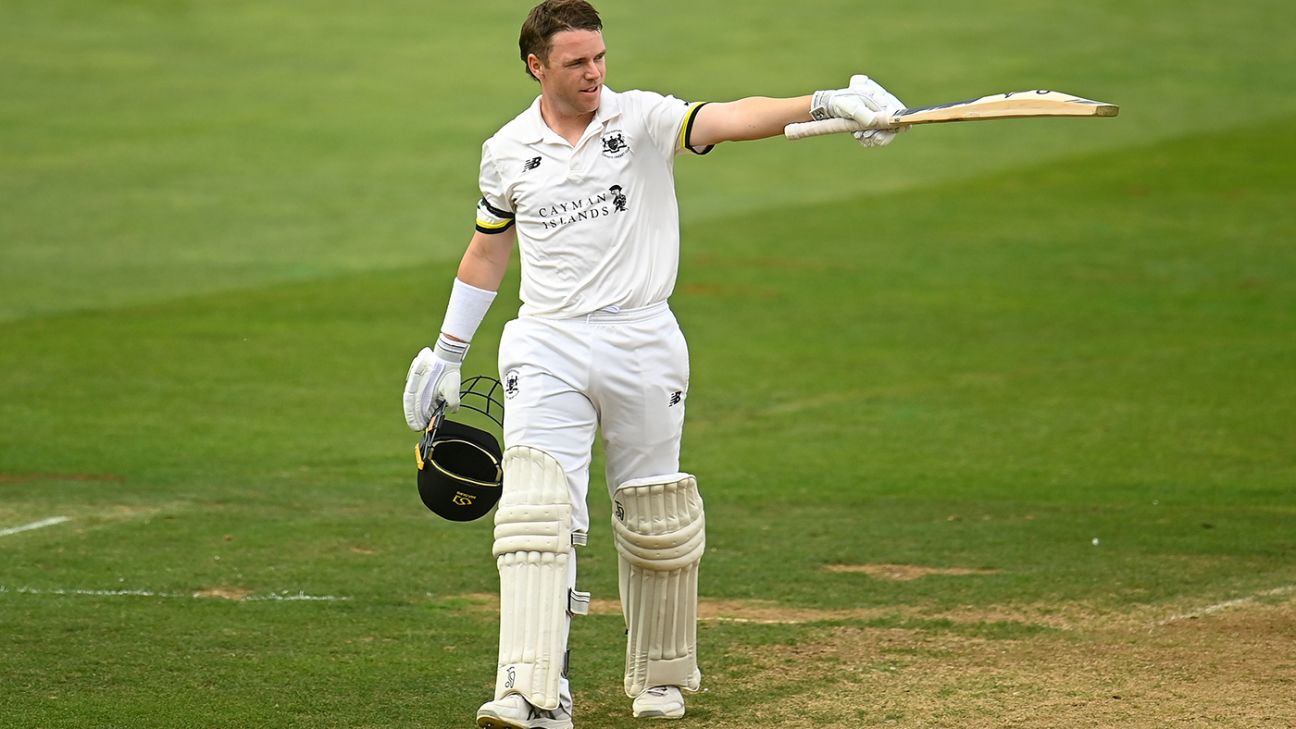 Marcus Harris hit his third LV=Insurance County Championship century of the season as Gloucestershire controlled the first day of their Division One relegation fight with arch-rivals Somerset in Taunton.

Invited to bat first on a gentle pitch at the Cooper Associates County Ground, the visitors scored 320 for 6, Harris scored 159 off 263 balls, including 17 fours and a six. Ben Charlesworth contributed 56 in the opening stand of 126 with the Australian left-hander, while Ollie Price weighed in with 52 against the Somerset attack, with Pakistan off-spinner Sajid Khan making his debut.

Sajid got little assist from the wicket on the first day, while the fast bowlers struggled for movement off the pitch or through the air.

Somerset captain Tom Abell would soon be questioning his decision to field as Harris and Charlesworth fought comfortably with the new ball and scored runs on both sides of the pitch. Charlesworth was the more aggressive of the pair, hitting eight boundaries in his 79-ball half-century, while Harris was content to be patient in supporting his younger teammate.

Sajid was pitched on 58 on aggregate from River End and gave Harris a moment of his concern at 33, when he saved a sharp chance for George Bartlett at short leg.

Gloucestershire’s opening pair scored a century in the 29th over and reached 115 for no loss at lunch. Harris was unbeaten on 47 and reached his fifty off 99 balls at the start of the afternoon session. Eleven runs were added when Charlesworth mishandled a pull shot off Cassie Aldridge and caught Josh Davey at fine leg.

The shortest interruption to rain followed. On the resumption, Harris hit the first six of the game straight over Sajid’s head.

Price scored 200 with a back-foot shot off Sajid, finding his first experience of the Taunton pitch as a test. Due to the delay in hitting his delivery, Harris scored his 22nd first-class century in 174 balls with the help of 13 fours and a six. It was a patient, no-frills effort.

Marcus Harris opens the innings with a big century,Getty Images

At tea, the scoreboard read 217 for one. With 20 pairs left, Price took another brief rain break before scoring a half-century off 127 balls, as Harris looked unconcerned.

The 21-year-old looked unimpressed, aiming an exceptional drive off a full, wide ball from Tom Lamonby and edging through wicketkeeper James Ray. Price helped Harris to 125 runs in 41 overs and Gloucestershire laid the foundation for the big score after scoring 251 for 2 wickets.

272 for 2 off the second new ball and Miles Hammond added nine runs, the left-hander dismissed Davey at second slip to Abell, scoring 7. Two balls later in the same over, James Bracey pulled out a defensive shot. One went for the rave and one for the duck. And the Battle of Somerset continued when Gloucestershire captain Graeme van Buren was bowled shoulder to shoulder by Lewis Gregory.

Harris remained like the Rock, scoring 150 off 246 balls. He was within eight balls to bat that day, hitting a back-foot shot off Gregory at slip off Jack Brooks. Nevertheless, Gloucestershire could feel satisfied with its efforts under mainly cloudy weather.