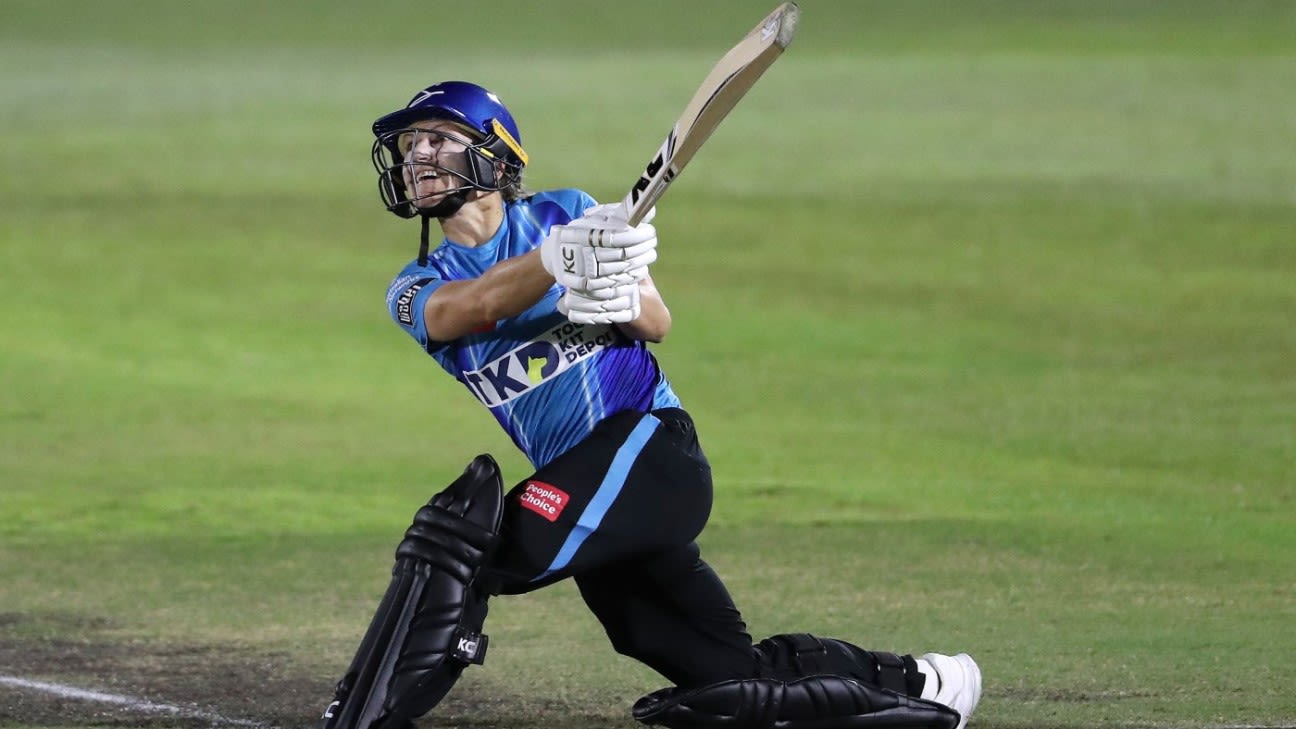 Late hitting under pressure from Bridget Patterson handed the Adelaide Strikers a six-wicket win over a poor Brisbane Heat and a second straight WBBL final.
The challenger was a see-saw of a contest with the strikers riding their luck in a nervous chase, with heroics from Patterson and Madeline Penna at Adelaide’s Karen Rolton Oval.

The Heat had their chances but missed four catches as the Strikers eye redemption for last season’s final heartbreak when they take on the Sydney Sixers at North Sydney Oval on Saturday.

Patterson moves on death
The Strikers gambled and held off the power surge till the 18th over with 33 needed. It proved to be a masterstroke when he scored 24 runs with a massive six over deep square leg off Patterson, who was unfazed by the position.

That meant nine runs were needed off the final over with Heat skipper Jess Jonassen off legspinner Amelia Kerr with the season on the line. But it was Penna who struck back-to-back boundaries to get the Strikers over the line with two balls to spare after a heartbreak during last season’s WBBL final against the Perth Scorchers.
Poor summer fielding proves costly

Perhaps they were tired after coming off a comeback from last night’s win over the Hobart Hurricanes in the Eliminator, but the Heat only had themselves to blame.

Courtney Grace Sipple’s drop in the outfield proved costly after Katie Mack and skipper Tahlia McGrath took the early wickets.
Deandra Dottin in particular enjoyed her second chance as she caused more trouble on Sipple in the midst of a scoring spree to put the strikers in a good position at the halfway mark.
Dottin’s cameo ended when she fell to Jonassen’s spin and was brilliantly caught by wicket-keeper Georgia Redmayne. But disaster struck when Redmayne injured his left calf after celebrating the dismissal. He limped off the field and was ejected from the game, as the Heat had to regroup quickly.

But their poor fielding, sparked by a reckless effort against the Hurricanes, continued to haunt them as they fell agonizingly short.

Megan Schutt did a pump with the ball for the Strikers,Getty Images

Striker clashed with Heat’s strong top order
At the start of a do-or-die match, it turned out to be a contest between the Strikers’ formidable attack and the Heat’s dynamic batting.

Opener Danny Wyatt top-scored with 52 against the Hurricanes but fell to the in-form Megan Schutt in the second over.

Seamer Darcy Brown troubled Redmayne with an inswing, who looked poor against the Hurricanes on his return from a hamstring injury.

Redmayne continued to look like a pale shadow of the player he had dominated earlier in the season, before hitting a confidence-boosting boundary through square leg. But he was bowled by Brown on the very next ball attempting the same shot, as the Heat were 13 for 2 in the third over.

But Grace fell in the eighth to keep the Heat at 43–3.

After Amelia helped steady the ship, the Heat needed a lift from Laura Harris, who was again bound for power-hitting.

He turned the game around with a 14-ball 44 against the Hurricanes and almost repeated the same with a 14-ball 33, showing a mixture of belligerence and shrewdness after coming to the crease at 88-4 after 14 overs. He hit Brown for four fours in the 17th over, but his best shot may have been an aggressive switch from Schutt, which went to the deep third boundary.

Schutt exacted revenge with the very next ball, but Laura’s pyrotechnics helped the Heat reach a competitive total. But in the end it proved not enough.