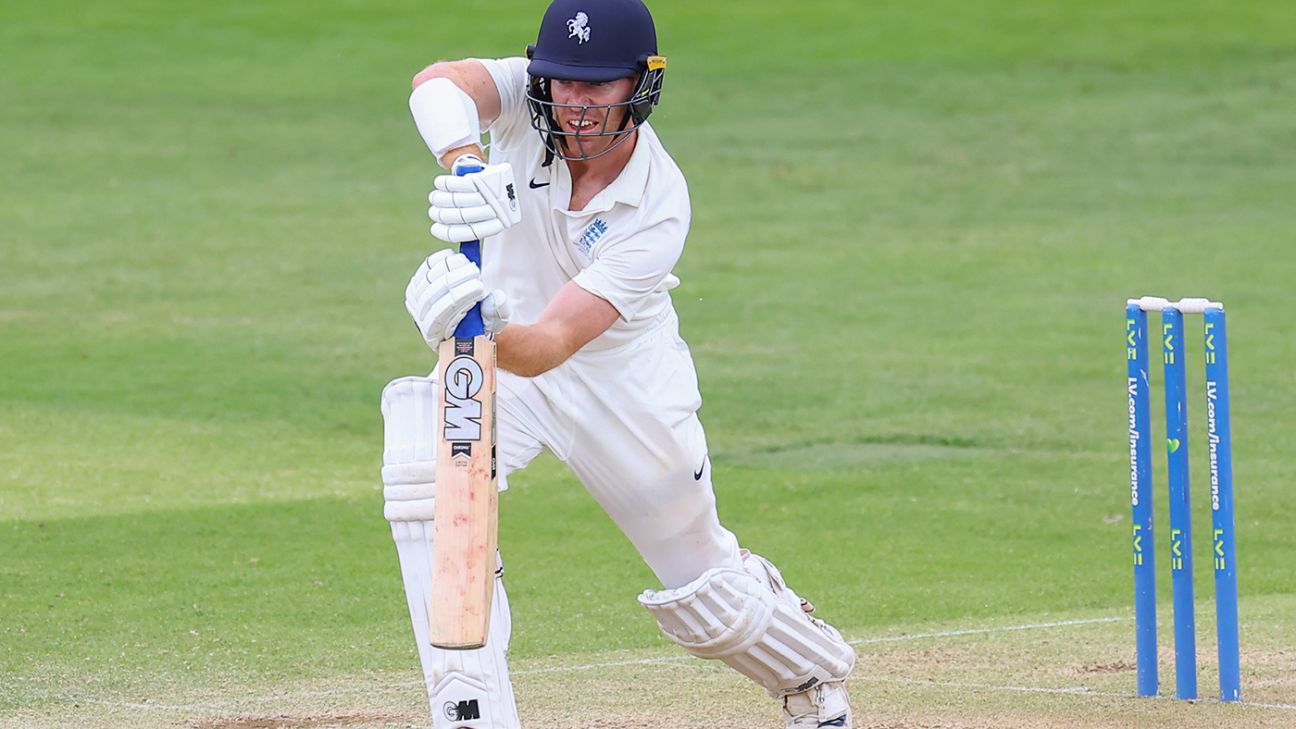 Hampshire were defeated by Kent for 57 in 87 minutes, which had a profound effect on their hopes of winning the LV=Insurance County Championship title for the first time since 1973.

Matt Quinn claimed six for 23 to beat Hampshire for the lowest first-class score at the Ageas Bowl—and his worst score since 1984—where he scored 56 against Kent at Canterbury in a set-up match. But was out.
The Hampshire fast-bowling trident of Mohammad Abbas, Kyle Abbott and Keith Barker combined to see Kent score 165 on a green pitch, which offered some, but not excessive, movement – but still a 108-run first innings total. acknowledged the deficiency.

Kent struggled again in his second innings, almost reaching 20 for three, but Hampshire – who started the Surrey leaders’ eight point round – knew it was time to score a point on Surrey during the day. Despite this, his dreams of a third pennant were fading. ,

To provide the backbone in difficult conditions, James Vince had chosen to chip in to Kent and reduced him to 32 for five before scoring 63 off 161 balls at Ben Compton’s ground.

What happened after that was the chaos of cricket.

Felix Organ was caught at second slip in the fifth over, which Weatherly inadvertently cut off his own stump and Nick Gubbins chased one who was behind him.

Quinn had picked up Weatherly from Rod Bransgrove’s end, but changed it to Hilton’s end to remove Vince, Hampshire’s top scorer 19, and Ian Holland in the same over – the former caught from the inside edge and the latter pushed into first slip. Gave.

It was the joint 45th lowest total in Hampshire history, as they only saw 101 deliveries.

Gilchrist and Harry Podmore both posted two-two each, to go along with Quinn’s six.

Previously, the Kent side had kept Sam Billings, Jordan Cox, Matt Milnes, Grant Stewart, Jack Crowley and Joe Denly away for all kinds of injury, international and paternity reasons, appearing to be below-par 165.

Tawanda Muye lasted only five balls into the match when he was leg in front of Barker and it took Abbas the same amount of time to pick up a wicket at the other end as Daniel Bell-Drummond overtook Donald – who despite Brown’s gloves. continued to take Back to XI.

Jack Leaning interrupted the wicket with a quick eight off 57 balls, but Abbott bowled the ball in an effort to work it to the leg side.

This marked the beginning of an aggressive bowling by the South African paceman – backed by six straight maidens at the other end by Hollande – who saw Ollie Robinson play and Harry Finch lbw off successive deliveries.

In the middle of the tumble was the indefatigable Compton, who in his 161 deliveries never deliberately played a ball going towards his stumps. He was in single digit for 36 balls and happily stuck to 18 off 36 dot balls as he let the ball go soft.

Compton started the season with three straight centuries, but endured a recent demanding spell in which he failed to reach double digits in his last six championship innings.

He completed his maiden half-century off 141 balls in early June during a strong partnership of 68 and 45 with Royal London Cup final heroes Joy Evison and Harry Podmore.

In Kent’s second innings, Compton was caught at first slip and caught by Night Watcher Conor McCarre at the hands of Abbas, and second Night Watcher Podmore was bowled by Holland. This meant that 23 wickets had fallen on a difficult day.