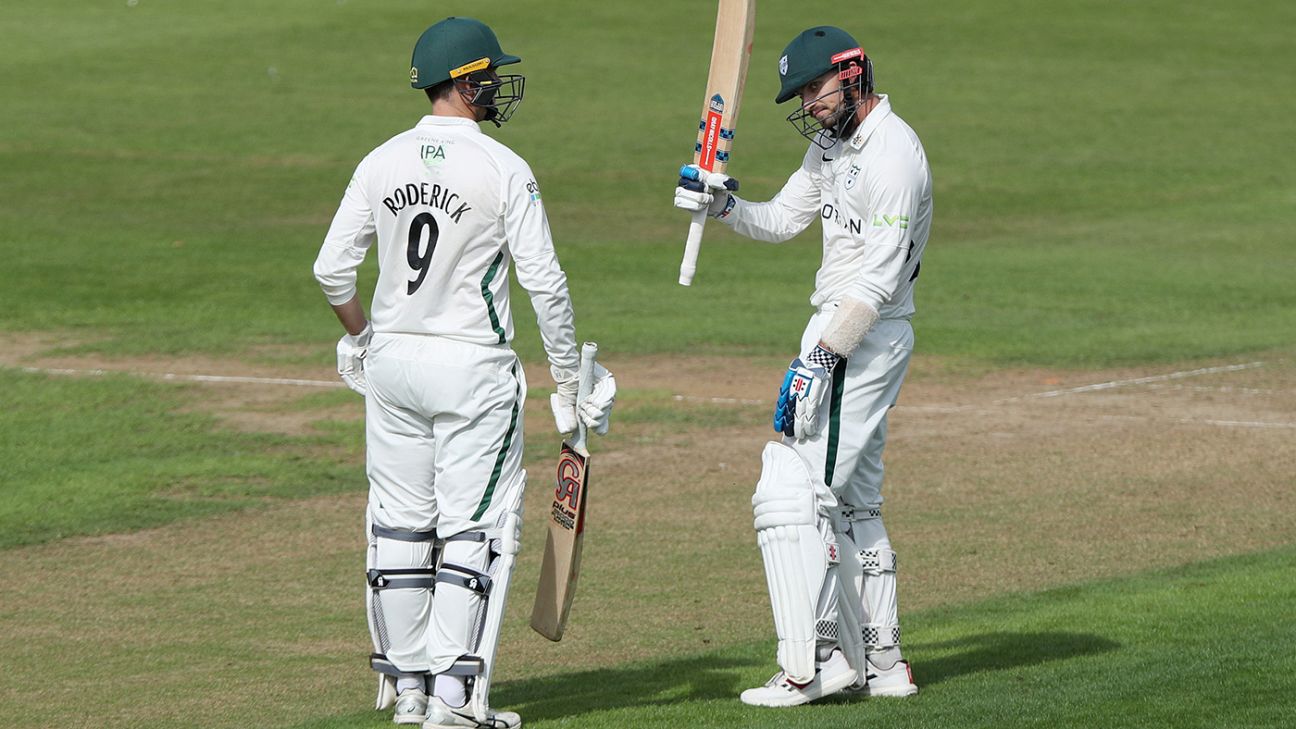 New Zealand Test bowler Ejaz Patel, making his debut at Glamorgan, took the wicket of Barnard in the last over before taking the new ball, with James Harris and Michael Hogan adding late wickets as Worcestershire closed at 285 for 7.

The visitors were reduced to 114 for 4, seamer Tim van der Guggen took 3 for 12 off 54 balls before Roderick and Barnard came together to save the position with a stand of 127, Roderick 88 not out. Ended the day by scoring runs.

The forecast over the next three days is not good, so every point will be crucial for both sides, who have this game second-placed Middlesex, Glamorgan now three points behind and Worcestershire a further 28.

Worcestershire captain Brett D’Oliveira won the toss on a gray morning in Cardiff and elected to bat, probably a 51/49 decision given the circumstances. That meant Welsh cricket fans had to wait to see India star Shubham Gill with the bat at the Glamorgan debut, but fellow new guy Patel was in action with the ball before the lunch break.

Early breakthrough came from the seamer, Harris dismissed Worcestershire opener Jake Libby lbw off leg-stump. Although it was van der Guggen’s first change that proved to be the most dangerous for the home bowlers, the Dutch international kept banging the bat at regular intervals and swinging the ball both ways.

Taylor Cornell swung a ball back to the side and his off-stump was taken off the ground, while Jack Haynes fell lbw to the same bowler.

All-time opener Ed Pollock was mixing aggression with attentiveness en route to a half-century, before another swinging delivery from van der Guggen took the lead with a push outside the off-stump.

It brought Roderick and Barnard together at a crucial time, but the pair specialized in rescue missions for their county this season and set out to do it again. Barnard overtook his more sober teammate as he went through his half-century with ease, Worcestershire reaching tea at 195 for 4.

Roderick also reached his half-century after the interval as the old ball and sunny conditions were more conducive to batting.

Patel, only the third bowler to take 10 wickets in a Test match, off the edge of Cathedral Road, was not afraid to give the ball plenty of air, but also kept that end tight, giving away less than three runs per over. . He dismissed Barnard lbw in the 80th over for a sweep shot.

Harris got his second wicket and a second lbw decision to see D’Olivera depart before Hogan clean bowled Ben Cox.