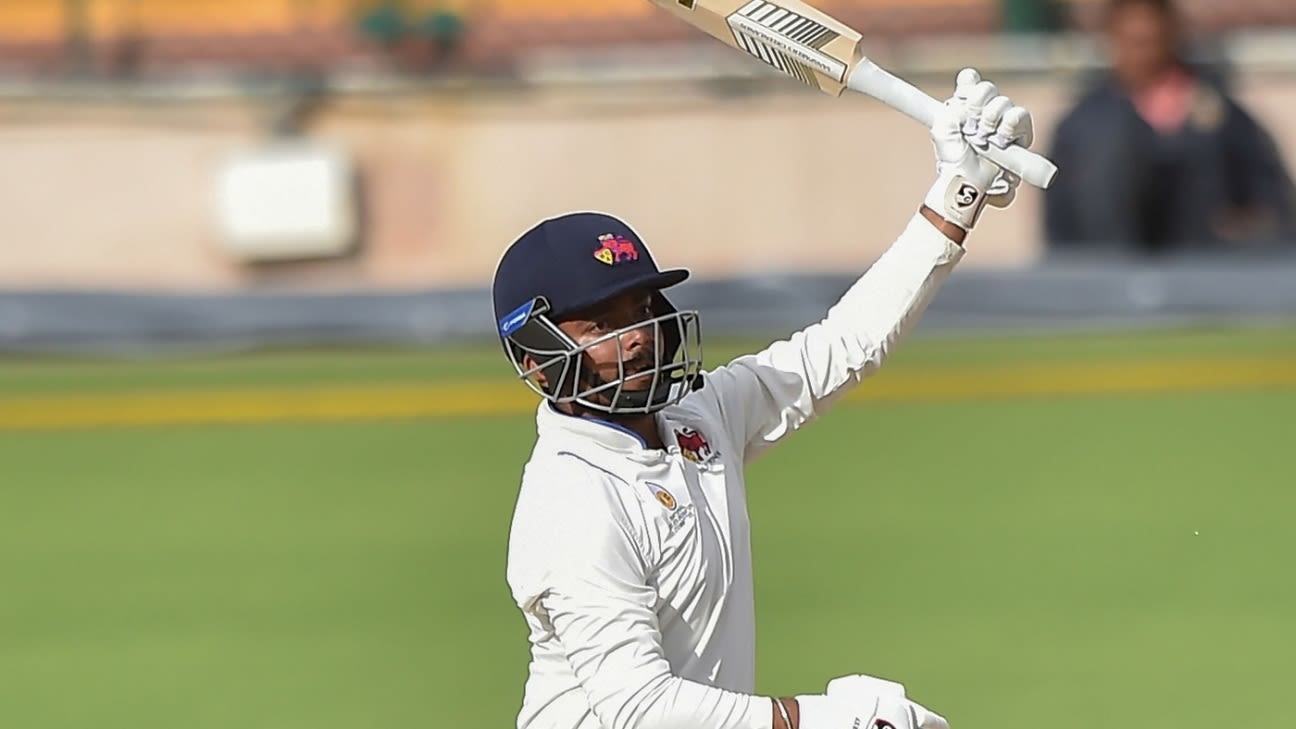 Having made fitness a priority, Prithvi Shaw is back to work after suffering a poor performance in a fitness test ahead of the IPL and then suffering from typhoid during the tournament.
Playing in only his fourth competitive match since IPL 2022, Shaw scored 113 runs in 121 balls for West Zone against North-East Zone in the season-opening Duleep Trophy at Chepauk. Shaw’s opening stand of 206 with Yashasvi Jaiswal laid the foundation for a declared total of 590 for 2 in West Zone’s first innings total, which included double centuries from Jaiswal and Ajinkya Rahane.

“This [hundred] special because it comes after a long time,” said Shaw. “After training, and giving myself time, [I am] Getting back on track, that feels great. I didn’t bat much in the off season. I was training with Vivek [Ramakrishna, Strength & Conditioning coach with Shaw’s IPL team Delhi Capitals], I was training in BKC [Bandra Kurla Complex, Mumbai], First we trained in Delhi and then came back and trained in Mumbai [during the off-season], Just 12 days before the Duleep Trophy, I started batting with the red ball to get back on track [cricket], Otherwise I was just working on my fitness.

“Getting back on track doesn’t mean I was going somewhere wrong. It’s like you’re lost somewhere and then you know yourself – you’re not there and you’re somewhere else. When you figure it out So you feel back on track. And when you’re scoring runs, it shows that you’ve done something. [right] – It can be in training or on the field. It wasn’t just about training hard, but yes, I lost a lot of weight. I lost seven-eight kilos in IPL and I [back] There. So, it’s nice to be lighter.”

Shaw admitted that “things could have been different” if he was fit during the IPL and fired for the Capitals. However, he has now embraced setbacks and is all set to get back in contention.

“In IPL, I got typhoid,” said Shaw. “That was the moment when I could play more games and score runs for my team. Things could have been different. That’s one thing that went wrong and obviously I was dropped after that. I did it again.” See, the graph of life in a cricketer can’t always go up. It goes up and down; It’s just timing and this year has been very tough for me. But I am someone who takes it as a challenge. takes the form and [looks to] Come out of it.”

Shaw last played for India in July 2021, when he was part of the second-string team touring Sri Lanka. He has since dropped so low in the pecking order that he is not even a part of India A which is currently playing against New Zealand A in the three-match unofficial Test series in Karnataka. Does Shaw see this domestic season as a make-or-break for himself?

“I think every match from here on out is really important for me,” he said. I’m someone who is a team man, but I personally feel that every match is important to me – whatever opportunity comes my way, I’ll try and get it… I’m just there I will go, train, work hard and score runs. Rest, I will let the selectors and everyone else make their decisions. I’ll just do my job.”

Shaw’s Duleep Trophy century came with a caveat – it was against a North-East side playing the Duleep Trophy for the first time. But he was happy with the way he played the new Kookaburra ball in the Chennai skies on the first and second days. If wicketkeeper Ashish Thapa had got a direct chance, Shaw’s innings could have been reduced to 80 runs. The North-East Zone then showed a big fight with the bat on the third day, forcing the West Zone bowlers to dig deeper. Thapa scored 43 runs in 103 balls, while number 8 Ankur Malik scored 81 runs in 95 balls, which included several sweeps.

“To be honest, if they [North-East Zone] playing at such a level, they’ve done something [right]Shaw said, “Whatever the players, a game is a game. You can’t really judge a bowler or a batsman. [just] their ability. They have potential because that’s why they are playing here and to be honest they were bowling really well. He bowled really well in the first 20-25 overs. I think we were really confident about our stroke against him, which really helped.

“Successful and Ajju [Rahane] Brother getting those doubles; I could play a little longer. It is not about whether the bowling attack is weak or strong, but if you are not focused enough then you only need one ball to get out. We were very focused, so we got these runs.”

Devarayan Muthu is the Deputy Editor at ESPNcricinfo