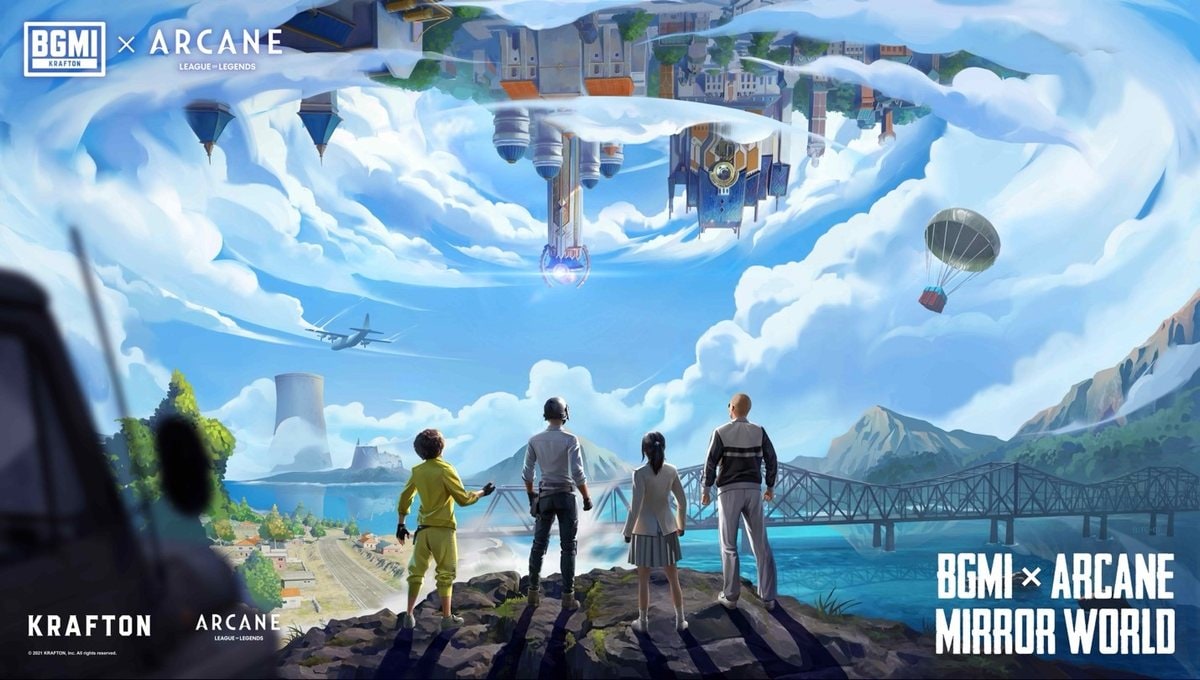 Crafton announced via a press release on Friday that it is rolling out the version 1.7 update for Battlegrounds Mobile India. The update will bring a new Mirror World mode to Erangel, Livik and Sanhok maps starting November 19th. You need to enable the Mode checkbox to access the new Mirror World mode. Once enabled, Mirror Island appears after players have played on the map for some time. Players can enter Mirror Island through the Wind Wall portal on the field. Once there, players get to play as one of four characters from League of Legends and Arcane – Kaitlyn, Jesse, Jinx and Vi.

Players are rewarded with Hextec crystals if they kill a monster and shards can be exchanged for various combat items. Once a player dies or play time on Mirror Island is over, players return to the regular battlefield. Crafton has also announced various Mirror World events where players win arcane characters, arcane emotes and items. This event will run till the holiday season.

Apart from this, the classic mode of Battleground Mobile India is also getting piggyback feature and weapon related changes. The piggyback feature lets players resurrect fallen comrades – but they can’t use any weapons or vehicles when this feature is activated. Battlegrounds Mobile India will see an increase in SLR, SKS, mini14, VSS, and DP28 weapons, which is due later this month. Along with this, a new grenade indicator will also help players to find out exactly where the explosives fell.

Battleground Mobile India is also collaborating with Liverpool FC. Players will be able to play the You Will Never Walk Alone event where they can win Liverpool FC-branded parachutes, backpacks and jerseys. Crafton is also launching an India-specific program called The Recall where players win Recall tokens that can be exchanged for rewards from the in-game store.

Crafton is also releasing 360 UC – Royale Pass Month 5 for in-game credits. The latest Royale Pass is based on the theme of Mirror Realm. Other benefits of the Royale Pass include the Katrina Leader costume, Black Circus costume, Kar98 skin and MK47 skin. sports too Received Many bug fixes and improvements with the version 1.7 update.