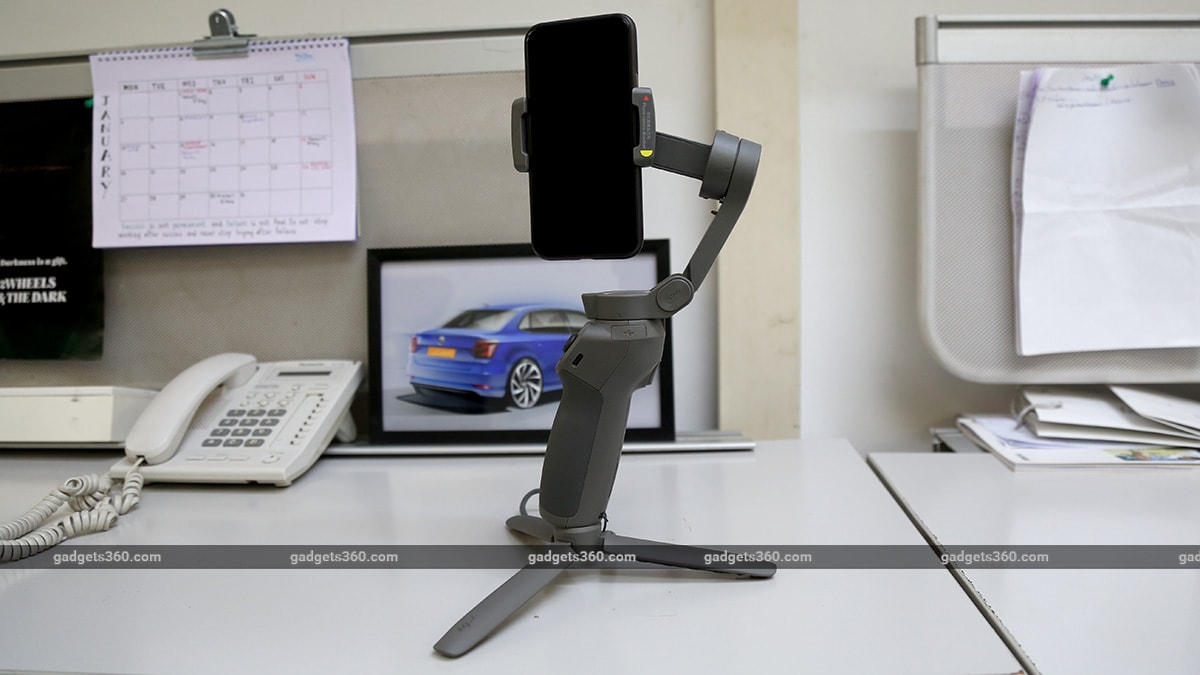 DJI is popularly known as a manufacturer of drones and handheld stabilizers for cameras. Even though it recently entered the action camera space with the Osmo Action, its core strength remains in manufacturing high quality gimbals for smartphones and cameras. Its most recent introduction has been the Osmo Mobile 3, a third generation handheld stabilizer for smartphones. This 3-axis gimbal makes it a great tool for content makers, especially if your phone doesn’t have the best electronic or optical stabilization.

The Osmo Mobile 3 gets some neat upgrades over its predecessor. It is now foldable for better portability; has better ergonomics; And boasts of new shortcuts and gestures. We’ve been using the DJI Osmo Mobile 3 for almost a week now, and here’s what we think about it.

Osmo Mobile 3 is available as a standalone device in India for Rs. 8,999 or as a ‘combo’ priced at Rs. 10,999, which includes a hard carry case and an Osmo Grip tripod. The latter doesn’t add any height to the gimbal, but does have collapsible legs, so it can be used as an extended grip when closed or as a regular tripod. The Osmo Mobile 3 weighs just 405g, which makes it quite lightweight. The hand of the gimbal and most of the parts themselves are made of plastic, but the quality is great. There’s ample rubber cladding on the handgrip for added support for sweaty palms.

The arm of the gimbal can now be folded, making it easier to carry. You can also mount the phone on it when folded, which is convenient. 3-axis stabilization lets you perform tilt, roll and pan actions while shooting. The front of the handgrip is where you’ll find the main buttons. These include a multi-direction joystick and buttons for recording and switching between shooting modes (‘M’). There’s a zoom slider on the left and a USB Type-C port on the right for charging.

The Osmo Mobile 3 also has a full-sized USB Type-A port on the handgrip, in case you need to charge your phone while shooting. Lastly, we have an ergonomically placed trigger button on the back of the handgrip, which can be used to reset the position of the phone, and depending on the number of taps, it can be used to activate ‘Sports Mode’. The same can be done to lock the tilt axis, and switch between your phone’s rear and front cameras.

The Osmo Mobile 3 has a standard tripod mount on the bottom so you can mount it on any tripod for timelapse shots, or use the bundled one if you buy the ‘combo’ pack. In the box, you’ll find a basic quick start guide, a USB Type-C cable, a wrist strap, and a soft storage pouch. We got the combo pack for review, which also includes the case and tripod. The hardshell case is of good quality and is rigid enough to provide good protection. We just wish it was big enough to accommodate a tripod as well.

Before turning on this device, you need to open it which is easily done thanks to the spring-loaded arm. The gimbal’s arms also lock into place when folded, thanks to carefully placed grooves and latches, so it doesn’t appear accidentally. The gimbal needs to be ‘activated’ before you can put your phone into the clamp to start using it. This involves downloading and signing in to the DJI Mimo app, which is available on the Google Play Store and Apple App Store. Once you go through the setup process, which checks for and downloads any available firmware updates for the gimbal, you are ready to use the Osmo Mobile 3.

The gimbal will automatically try to center the phone you have installed but you can also manually adjust its position by holding the tilt motor. You can also calibrate the phone’s position and angle via an option within the Mimo app. osmo mobile 3 is Compatible with Most of the popular phones today but not all features are available for all phones. For example, slow-motion video and 60fps video in the Meemo app are currently only available on iPhones. Shooting at 4K is still not available on some Android phones such as the Realme X2 Pro (Review), but it is available on others such as the Samsung Galaxy Note 9 (Review). However, even if your phone is not on the list, you will still be able to use all the basic features of the app. Hopefully, we should see better support in future versions of this.

We tested the Osmo Mobile 3 with multiple phones like Redmi Note 8 (Review), Realme X2 Pro Master Edition, Samsung Galaxy Note 9 and Apple iPhone 11 Pro. The holder for the phone has also been cleverly designed so it doesn’t come into contact with any of its buttons, allowing you to center it precisely. We noticed that all the phones we tried got quite hot after using the Mimo app for a long period of time, and this quickly drained their battery. When you’re not shooting, it’s best to turn off the screen or put the gimbal in standby mode to save power on both devices.

Osmo Mobile 3 lets you capture professional looking still video without much effort. This is especially useful on phones that don’t have electronic stabilization or don’t do a good job of it. For example, the Redmi Note 8 shoots good quality 4K videos in the daytime, but without the stabilization. Osmo Mobile 3 fixes this, an otherwise unusable video clip looks like it was shot on a more expensive phone.

We even tried capturing a video while zooming in, which adds up to the jitter with even the smallest of movements. Even on the go, the gimbal made a different world. If you have a high-end phone with optical stabilization, shooting in low light is still challenging. Having a stabilizer for such situations makes a noticeable difference to the final output.

In addition to the standard photos and videos, the Mimo app also offers other shooting modes and features. It lets you capture professional looking motion timelapse videos, where you can set the path the gimbal follows for the duration of the timelapse. Hyperlapse videos are also possible, and we liked the end result pretty well, even with a budget phone like the Redmi Note 8.

‘Story Mode’ lets you easily create short stories. All you have to do is choose a template and follow the guide to capture short clips, which are then automatically stitched together with transitions, on-screen text, and music. You also have the option to share these clips on social platforms instantly.

For panoramas, you can choose a 180-degree shot or a larger shot, which captures much greater angles. However, with the latter, the end result didn’t always look good and we noticed some discrepancies in stitching at times. Plus, the Osmo Mobile 3’s gimbal still has a limit to how far it can spin, so you can’t take 360-degree photos or panoramas on it.

The Osmo Mobile 3 also features ActiveTrack 3.0, which is available through the Meemo app. You can select the object you want to follow through the viewfinder, and the gimbal will automatically track it to make sure it’s always in the center of the frame. It worked great with people, but not so much with fast moving objects. There is a Sport mode that can be activated by double-pressing and holding the trigger button. This enables active tracking on the object in the center of the frame and increases the speed of the motors, so the gimbal can pan and tilt more quickly. ActiveTrack 3.0 can also be enabled by palming the camera or showing a ‘V’ sign gesture, but this needs to be enabled in the app’s settings.

Other gestures include double-tapping the mode button, flip the phone horizontally or vertically; And triple-tap the trigger button to switch between the front and rear cameras. You can also choose to enable the ‘Quick Menu’, which lets you use the joystick to navigate through all the shooting modes, so you never have to reach for your phone’s screen again.

DJI claims up to 15 hours of battery life. With actual use, we found battery life to be closer to 10 hours, which still isn’t bad. We think this should be more than enough runtime for whatever you’re filming at a stretch. The Osmo Mobile 3 can be used while charging so you can technically use it for a long time. It took us about two and a half hours to fully charge it when it was connected to a 10W adapter.

The DJI Osmo Mobile 3 works with any phone, but some features in the Mimo app are only available on certain models.

The DJI Osmo 3 is an incredibly fun gadget and an essential accessory for any serious content creator. Even for casual users, this is a great handy accessory to have when you’re on vacation or if you just like to make home videos. The best part is that it’s easy to use, and it can make videos shot with a budget smartphone look more professional. We love how compact it folds up when folded; The topic tracking feature works well on people; And the Mimo app provides useful shooting modes. We hope DJI updates the app to support greater resolutions and framerates on a wider selection of Android phones.

Starting price of Rs. 8,999 is pretty good considering the performance and features of this device. We’d recommend putting in a little more money and getting the ‘combo’ bundle, as a hardcase is a must if you travel a lot and a tripod is handy for timelapse shots.