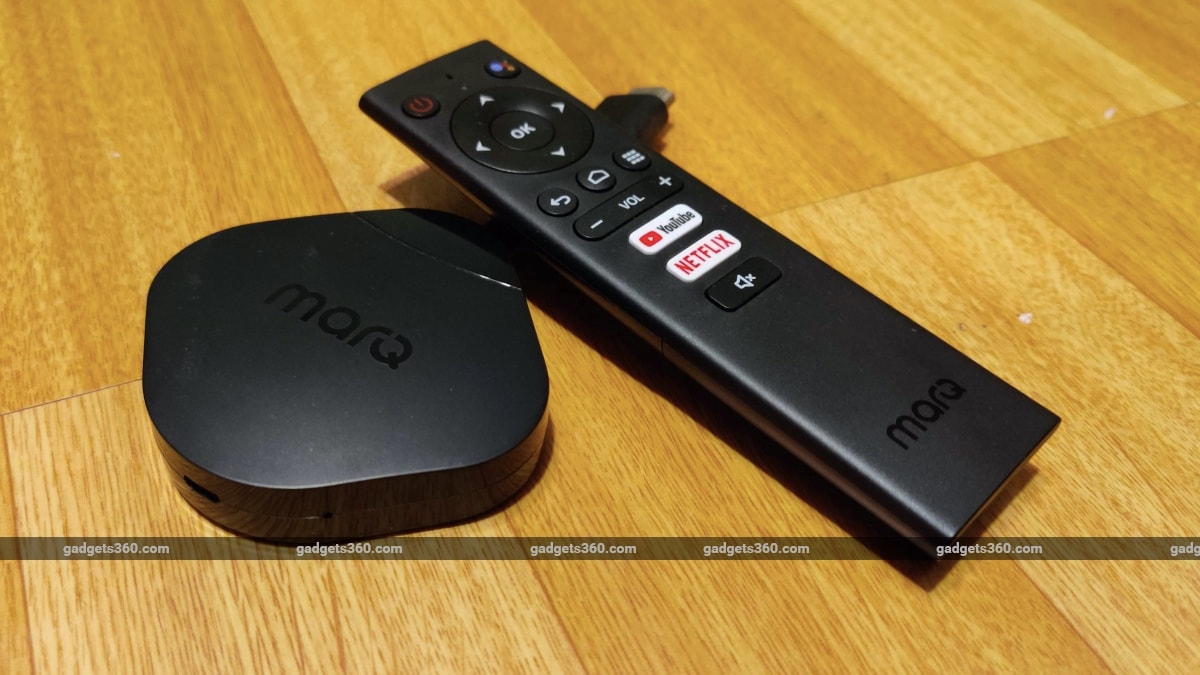 Indian e-commerce giant Flipkart is best known for selling all kinds of products from different brands, but it also has a huge catalog of products under its own brands. One of these is MarQ by Flipkart, which is used to market its televisions and home appliances. Building on its experience in television, MarQ now launches its first media streaming device, the Turbostream.

3,499, priced at Rs. MarQ by Flipkart Turbostream is a palm-sized streaming device that connects to your TV’s HDMI port. It runs on Android TV and gives you access to various streaming services and other features, just like you would get on a smart television. Is the Turbostream worth the price? Find out in our review.

Some streaming devices are meant to sit on a table-top, such as the Apple TV and Nvidia Shield TV Pro. Others, such as the TurboStream, are small and light enough to be connected to the HDMI port on the back of the TV. Once plugged in and set up, you’ll never need to look at the device again.

The TurboStream is diamond-shaped with a permanently attached HDMI plug affixed to one end, and a micro-USB port on the other end. The package includes a special cable, which has a USB Type-A plug on one end, a micro-USB plug for power on the other, and splits into an IR receiver module. The USB plug can be connected to the included wall power adapter or to your TV’s USB port if it can provide enough power. Also included in the box are a Bluetooth remote for controlling the TurboStream and batteries for the remote.

TurboStream runs on Android TV and is powered by a quad-core ARM-based processor with integrated Mali 450 GPU, 1GB of RAM, and 8GB of internal storage for apps. There is dual-band Wi-Fi for connectivity, and support for Dolby Audio. Streaming is supported at up to full-HD (1920×1080-pixel) resolution at 60fps on all major apps on the MarQ Turbostream. You can also use Bluetooth 4.0 to connect audio accessories such as headphones or speakers to the MarQ TurboStream for direct sound.

The MarQ TurboStream comes with a remote that has both IR and Bluetooth; The IR emitter can be used to control power and volume on the device, as well as supported TVs via HDMI-CEC, while Bluetooth connectivity lets the remote communicate with TurboStream devices, even when between the two. There should be no straight line. The remote works with two AAA batteries, and is small and lightweight.

The remote’s buttons include a D-pad for navigation; a Google Assistant button; keys for home, back and app drawer; and buttons to adjust or mute the volume. There are also hotkeys and power buttons for YouTube and Netflix. There is a microphone on the remote for giving voice commands to Google Assistant.

TurboStream runs on Android TV 9 Pie, with the stock launcher serving as the user interface. It makes for a familiar experience that we quite liked; The content and apps are well crafted and your favorite apps are easy to access. Having access to the Google Play Store for Android TVs also means that it’s possible to install a variety of apps, many of which have been developed specifically for use on TVs.

We used the MarQ by Flipkart Turbostream with a TV from the same brand – the MarQ by Flipkart 43SAFHD, which is about a year old and was running Android TV (Oreo). The TV’s UI has some limitations in terms of supported apps, especially Netflix, so TurboStream gave us a better software experience and was easier to use as well.

The homescreen shows your favorite apps at the top, and recommendations from various installed apps at the bottom, which can be customized. If you have a non-smart TV, Turbostream completely transforms your viewing capabilities, with Internet connectivity and well-designed apps for useful content. There’s also a built-in Chromecast receiver, so you can cast content directly from any compatible device.

The list of apps on MarQ by Flipkart Turbostream is long, and includes major streaming services for video and audio, sports and educational content providers, useful tools, and more. Netflix and YouTube come preinstalled, and you can download other apps like Spotify, Hotstar, Zee5, Jio Cinema, Facebook Watch, etc. There are even a few oddball apps we enjoyed using, such as Realistic Fireplace (which puts an animated fireplace on the screen).

While most major streaming services have a good app available to download, one notable omission on MarQ TurboStream is Amazon Prime Video. This is for a few obvious reasons – Flipkart and Amazon are bitter rivals in the e-commerce space in India, and Turbostream users will have no way of accessing Amazon’s streaming service. It is not possible to bypass it using Chromecast; Attempting to mirror our smartphone’s screen while using Amazon Prime Video resulted in only a black screen on the TV, though we could hear sound and see subtitles.

The Flipkart 43SAFHD Android TV’s MarQ The one we used is a full-HD TV, so we were able to test the Turbostream’s capabilities properly. The streaming device was fast and usage was hassle-free during our time with it; We didn’t experience any crashes or major problems. Streaming was smooth too, and with a fast internet connection we had no trouble streaming content from various services including YouTube, Hotstar, and Netflix.

Netflix and YouTube worked best for us thanks to official apps for both these services that come pre-installed and work flawlessly. We also had a great time watching content on Hotstar, and all these services ran according to the TV’s capabilities, streaming content at the highest available resolution.

We had a minor issue with volume adjustments when HDMI-CEC was activated on the MarQ TurboStream; Adjusting the volume with the TurboStream’s remote sometimes changes both the device’s and TV’s volume, causing non-uniform level changes. Turning off HDMI-CEC via TurboStream’s settings fixed it, but it also meant we had to control TVs and streaming devices via their individual remotes.

We found it easier to leave the TV’s volume at a certain level while only adjusting the TurboStream’s volume, and also avoided turning it off too often, keeping the streaming device on but only turning the TV off while idle.

The device runs on Android TV 9 Pie with stock interface

The MarQ from Flipkart Turbostream is an affordable, capable device that does its job well. This will be most useful for users who have a non-smart TV, which lets them access online streaming content without replacing their TV. This will also come in handy if you have a Smart TV whose interface you really don’t like, or a TV that hasn’t been updated for a while and is low on supported apps.

The device is simple, easy to use, functional, and gets the job done. However, the lack of support for Amazon Prime Video is a significant drawback, and it will actually be a dealbreaker for many people, given that Prime Video has an excellent catalog of content and affordable subscription pricing.

It’s also worth noting here that if you have a 4K television or subscribe to any streaming services that offer 4K content, the MarQ Turbostream won’t exploit the full potential of its resolution. In that case, you’re better off buying a 4K-capable streaming device like the Amazon Fire TV Stick 4K.

The Airtel Xstream Stick is also worth considering, which is a bit more expensive but has more in terms of content and apps.