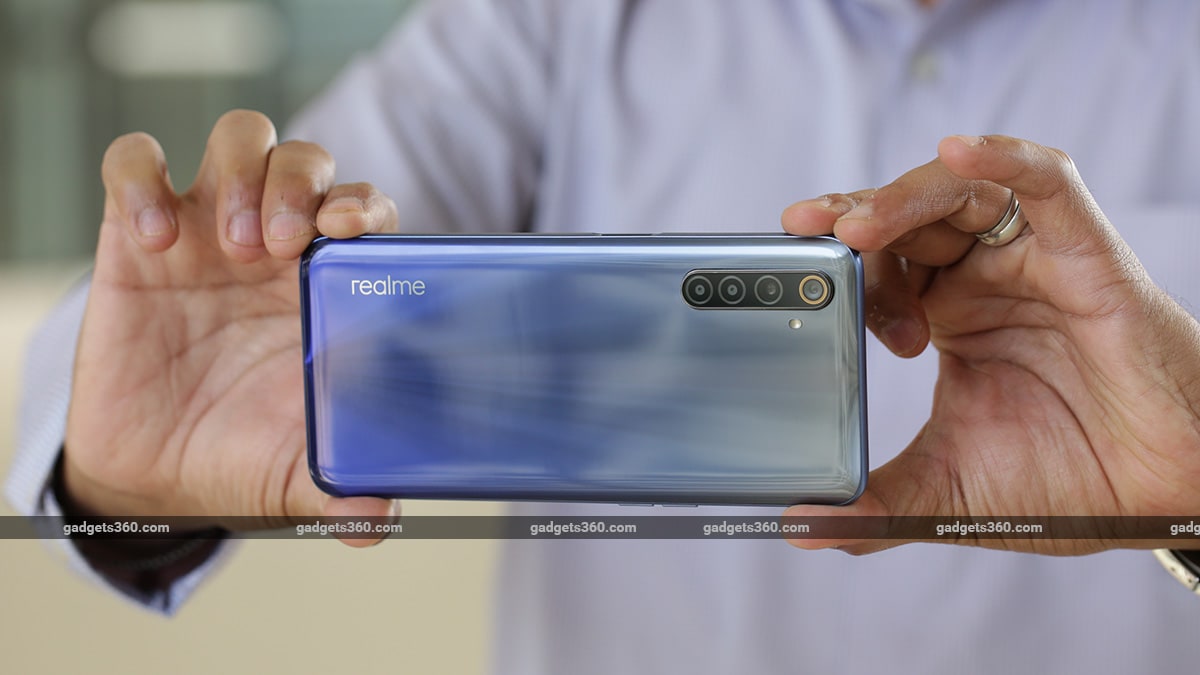 Realme started the year with a few new models in the budget segment and all-new 5G-enabled flagships. Now, the company has just recently launched upgrades to the Realme 5 series, called the Realme 6 and Realme 6 Pro. The more affordable of the two, the Realme 6 features a hole-punch display with 90Hz refresh rate, which are both a first for a budget Realme device and unheard of in the budget segment before now. The phone also packs in the powerful MediaTek Helio G90T SoC, which was exclusive to the Redmi Note 8 Pro in India for quite some time now.

What has changed is the status of the Realme 6 as it now starts at Rs. 12,999. While the higher pricing will raise eyebrows, does it have the stuff to justify this price tag? We review the Realme 6 to see if it’s the best budget smartphone you can get right now.

Instead of the Sunrise design on its lowest-cost model, Realme has introduced a new Comet design. The Realme 6 has a gradient finish with multiple stripes at the back, which converge at the bottom center where the charging port is. It glows when it hits the light, giving this phone a premium look.

The Realme 6 sports a 6.5-inch display which is similar to the Realme 5 (Review). However, the new phone does not have a notch. Instead, it has a hole-punch that isn’t very common at this price point. The hole is in the top left corner. There are thin bezels on the side of the display, but the chin at the bottom is quite thick.

The corners of the Realme 6 are rounded, so it doesn’t slide into your palm when you hold the device. The back is slightly curved which makes it comfortable to hold. As before, Realme has opted for a side-mounted fingerprint scanner which is located on the right side of the device. We liked the placement because the thumb naturally rests while holding the smartphone in the right hand. If you are left-handed, you may need to enroll your left index finger and thumb to unlock the smartphone.

Realme has moved the volume buttons to the left side and placed them slightly below which makes them easier to hit. The SIM tray is located just above the volume buttons and is flush with the body. We noticed that the phone is slightly thicker at 9.6mm and packs in a 4,300mAh battery. The weight of this phone is 191g which is manageable. Realme has finally moved to the USB Type-C standard, which was long overdue. There is a 3.5mm headphone jack and loudspeaker grille with Type-C port.

Like most recently launched smartphones in the market, the Realme 6 sports a quad-camera setup at the back. The module protrudes a bit but has a metal trim around it which should prevent it from getting scratched. Speaking of which, you should note that the rear panel is not glass, and can pick up minor scratches and scuffs. Realme has bundled a clear case in the box which we recommend that you use.

With the Realme 6, the company offers a full-HD+ display, something that was not there in the previous model. The display has a 90Hz refresh rate which helps in giving a smooth experience to the smartphone. Realme has set the refresh rate for auto which lets the phone decide between 60Hz and 90Hz, but you can override that. The display has a density of 405ppi and thanks to the hole-punch, the screen-to-body ratio of the Realme 6 is 90.5 percent. There is Gorilla Glass 3 in the front for protection.

In terms of connectivity, this phone offers Bluetooth 5, dual-band Wi-Fi ac and three navigation systems. It is a dual-SIM device that supports 4G as well as VoLTE. It also has the usual sensors.

Realme 6 runs Android 10 out of the box

Talking about the software, Realme has made some changes. The company no longer ships ColorOS on its smartphones; Instead it has its own Realme UI. The new Realme UI runs on top of Android 10 on the Realme 6. Our device was running the February security patch.

We found the UI to be easy to use with a close look to stock Android. The Settings app is well designed and we didn’t have to struggle to find what we were looking for. Other features like Digital Wellbeing, Focus Mode, Dark Mode and Riding Mode are also available in Realme UI. Realme Dual-Mode Audio, which allows you to connect Bluetooth and wired headset to music, listed on the smartphone, but this feature is listed under Realme Lab.

We found some preinstalled apps on the device, such as Facebook, Dailyhunt, Gaana, Helo, Opera News, UC Browser, WPS Office and some Google apps. It also has some apps from realme such as its own app store called realme store, community, game center, game space and app market. Stock apps like browser used to push notifications constantly, which we had to disable.

The spec sheet of the Realme 6 looks interesting and it translates to decent performance in day-to-day usage. The 90Hz refresh rate makes the interface quite smooth. We found the display to be a bit reflective in sunlight, but gets bright enough to see the content on the panel. We found the viewing angles to be good, and this phone lets you change the color temperature of the panel.

Realme 6 has a side-mounted fingerprint scanner

We were happy with the performance of the Realme 6 as we never had to wait long for it to load apps. With 8GB of RAM on our device, it can easily multitask without terminating apps in the background. App load time was also less.

We recently ran benchmarks on the Realme 6 to see how it compares to some of the other smartphones we’ve tested. In the AnTuTu benchmark, the Realme 6 managed to score 290,210 points, which is surprisingly higher than the Poco X2 (Review) score. In Geekbench 5’s single-core and multi-core tests, the Realme 6 scored 467 and 1688 points respectively. The Realme 6 also scored 59fps and 25fps in GFXBench T-Rex and Manhattan 3.1.

Mediatek has ranked the Helio G90 series as a gaming processor and we were curious to see how the Realme 6 would hold up with gaming. We played PUBG Mobile on the smartphone and it defaulted to high settings with graphics set to HD and frame rate set to high. We didn’t notice any lag or stutter while playing the game at these settings. After about 20 minutes we noticed that the smartphone got a little warm to touch.

The battery life of Realme 6 is quite good. It managed to last 19 hours, 26 minutes in our HD video loop test. With our usage, the Realme 6 managed to last for over a day and a half before being plugged in. A 30W fast charger is bundled in the box. Using this, the phone got to 65 percent in 30 minutes and it took a little over an hour to fully charge.

The Realme 6 packs a quad-camera setup at the back that includes a 64-megapixel primary camera, an 8-megapixel wide-angle camera with 119-degree field of view, a 2-megapixel monochrome camera, and a 2-megapixel macro camera. On the front, it has a 16-megapixel selfie shooter. The camera software is similar to what we’ve seen in many other mid-range smartphones, and we had no problem going through the different shooting modes in the camera app. There are quick toggles for HDR, Filters, and Chroma Boost. There is AI scene recognition and the smartphone is able to detect where it is pointed.

In most of the scenarios, the Realme 6 was quick to focus and measured light just fine. In daylight, the Realme 6 took decent shots, and details were visible when zoomed in. In bright scenes, the Realme 6 enables HDR automatically. Photos are taken at 16 megapixels by default but you can take 64 megapixel shots if you prefer. The details in these were much better due to the higher resolution.

The wide-angle camera of Realme 6 is not as good as the primary camera in dynamic range. The photos provide a wide field of view but there is a noticeable lack in terms of detail and quality. The output was a bit distorted even at the edges.

For close-ups, the Realme 6 does a good job of separating subjects from the background. It also managed to focus fast, resulting in decent shots. Portrait mode lets you select the level of blur before taking a shot. Edge detection was excellent, and the phone could distinguish between the subject and the background.

The macro camera lacks autofocus but lets you get closer to a subject. While shooting indoors, it managed to take good shots. Output is limited to 2-megapixels in resolution.

Camera quality drops a bit in low light. While you’ll still get good looking shots, you’ll notice a lack of detail when you zoom in. Night mode provides better overall results in low light by combining multiple frames into one. Shots taken with Night Mode had much better detail.

Selfies taken with the Realme 6 had decent detail, and beautification is enabled by default. You can turn it off to get a natural looking output. These pictures are enough to be shared on social media.

Video recording tops out at 4K for the primary shooter and 1080p for the selfie camera. You have the option to shoot at 1080p 60fps using the primary camera. Footage shot at 1080p is stable, but not at 4K. We noticed a slight flicker effect in low light.

Reality has once again delivered an impressive smartphone at a reasonable price with the Realme 6. The device packs in a powerful processor, offers good battery life, and comes with a 30W fast charger in the box. Realme’s UI has improved but we wish there was less bloatware. If you are looking for a value-for-money device that costs around Rs. 15,000, you might just want to wait a while for Xiaomi’s Redmi Note 9 series to launch. However, you will still be satisfied with this phone.