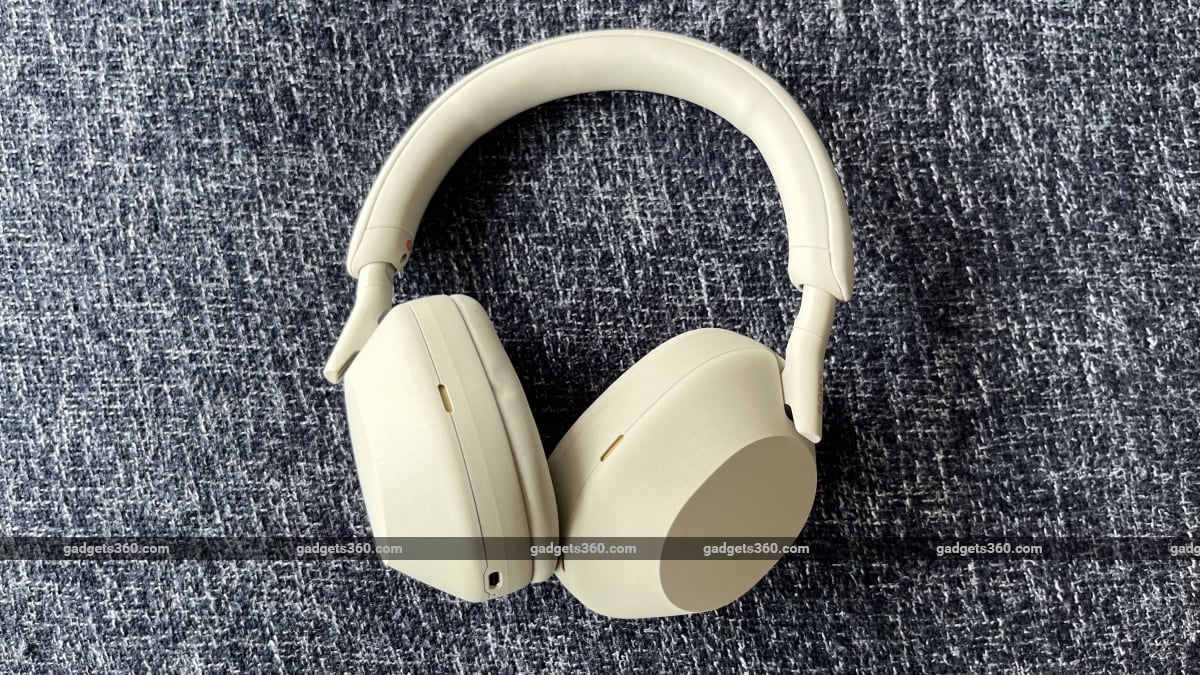 Sony’s 1000X line-up has been around since 2016, when the MDR-1000X wireless headphones came out. Since then there have been four successors to the MDR-1000X, the latest of which was launched in mid-2022, nearly two years after the launch of the Sony WH-1000XM4. The Sony WH-1000XM5 is the latest in the now-iconic and well-reputed line of flagship wireless headphones, and promises improvements across the board, including design, audio quality, and active noise-canceling performance.

Priced at Rs 34,990, the Sony WH-1000XM5 promises a much fresher design and better performance. However, with true wireless earphones leaning towards a more convenient form factor, do full-size over-ear headphones still hold a place in the premium segment? Find out in our review.

The Sony WH-1000XM5 has a refreshed design, although many aspects are similar to the WH-1000XM4

Sony used a fairly similar design on the 1000X series from generations one to four, but the WH-1000XM5 sees a significant redesign. Changes are visible in the headset with ear cups, hinges, headband and foam padding, all of which look completely different. The result is a headset that’s arguably more ‘modern’ looking, but the old-style familiarity will certainly be missed by some.

The overall size and shape make the Sony WH-1000XM5 lighter at 252g, and maybe even a bit more comfortable. The soft padding on the underside of the ear cups and headband feels great, and creates a snug and noise-isolating fit. Wearing glasses somewhat hindered the noise isolating seal, which in turn affected the quality of active noise cancellation, but the performance degradation was small enough to be overlooked when music was playing.

Headband adjustment is different on the Sony WH-1000XM5, with the adjustment system now moving independently rather than in a set groove on the track. A significant drawback of the new design is that, unlike the WH-1000XM4, the headphones don’t fully fold inward. Although the included carry case can easily hold the headphones, it’s not quite as compact as the previous model for travel.

As before, the controls on the Sony WH-1000XM5 are a combination of physical buttons and gestures on the outer touch-sensitive exterior of the right ear cup. The gesture set is stable and includes tap, swipe, or touch-and-hold. You can also set double-press and triple-press controls for the NC/AMB buttons using the app.

Power and ANC Control Sony WH-1000XM5 . depend on the physical buttons of

Usefully, there’s a wear-detection sensor that plays or pauses music when the headphones are turned on or off respectively. You can also place your palm on the right ear cup to quickly activate hear-through mode, which turns the volume down and the ambient sound setting on to be able to hear your surroundings.

There are only two buttons on the left, which control power and noise cancellation or ambient sound features, while playback and volume controls are operated using gestures. The left ear cup houses a 3.5mm socket for wired connectivity, while the right ear cup houses a USB Type-C port for charging.

The Sony WH-1000XM5 has a ‘Speak to Chat’ feature, which pauses playback and activates ambient sound mode when the headset hears you speak. There’s native support for the Google Assistant and Amazon Alexa voice assistants, as well as the ability to free both of these hands with just the wake command. Other features include support for Google Fast Pairing, multi-point connectivity for two devices simultaneously, and support for Sony’s 360 Reality Audio sound format.

The Sony Headphone Connect app has been a part of the experience with most of Sony’s headphones and earphones, and naturally works with the WH-1000XM5 as well. The app provides access to controls and settings based on the WH-1000XM5’s feature set, which is neatly sorted into four major sections.

Sony Headphone Connect app can be used for WH-1000XM5 . Can be used to adjust various functions and settings on

I generally found the WH-1000XM5’s natural sound signature to be ideal and didn’t feel the need to change equalizer settings at all, but many would appreciate the option to do so. The Bluetooth connection quality setting also seemed redundant given the significant improvements in stability with the LDAC Bluetooth codec. It’s worth pointing out that multi-point connectivity will disable the LDAC Bluetooth codec, and can only be used with the AAC codec.

The Sony WH-1000XM5 uses Bluetooth 5.2 for primary connectivity, though you have the option of connecting a stereo cable and using it as a wired headset. The SBC, AAC, and LDAC Bluetooth codecs are supported, and the headphones have 30mm dynamic drivers with a frequency response range of 20–40,000Hz when using Bluetooth connectivity with the LDAC codec. It also has a rated sensitivity of 102dB.

There are a total of eight microphones on the headphones for ANC, of ​​which four are working for voice communication. The Sony WH-1000XM5 uses a V1 integrated processor with a QN1 noise canceling processor that specifically enables ANC functionality. The sale package includes a new collapsible carry case for the headphones, a USB Type-A to Type-C cable for charging, and a stereo cable for 3.5mm wired connectivity.

Considering how cool (and hugely relevant) the Sony WH-1000XM4 still is, I wondered how much better the Sony WH-1000XM5 could actually be. Interestingly, Sony has managed to make small but meaningful improvements to the sound quality and active noise cancellation on the headphones. However, the general approach remains the same, and the upgrades feel more incremental and less generational.

As before, the Sony WH-1000XM5 has a sound signature that is both detailed and out-and-out at the same time. The full-size ear cups and larger drivers significantly benefit the sound on the WH-1000XM5, offering a spacious, flexible and detail-oriented approach that sounds exhaustive and incredibly satisfying.

The sonic signature is somewhat V-shaped with bass and treble striking audibly harder than in the mid range, but the expansive nature of the sound meant the mids didn’t feel dull or submerged at all. Listening to When I Get There by Big Wilde, the intro felt beautifully rich and powerful, before transitioning to the tight, punchy and aggressive bass of the down-tempo beat. During the various stages of this varied track, the Sony WH-1000XM5 seemed smooth and incredibly quick to react to changes.

The Sony WH-1000XM4 sounded at ease with every music genre I listened to; The headphones seemed to adapt to the track almost effortlessly, regardless of fast-paced or slow-and-easy. Listening to the Living On video (Claptone Remix), the headphones boosted energy levels while effortlessly maintaining the tempo of the track, while the slow, pop-infused Bom Beedi Bom by Nick Jonas and Nicki Minaj focused intelligently on the sensual Rhythm and rhythmic vocals.

As expected, the Sony WH-1000XM5 performs best when working with the LDAC Bluetooth codec and good quality audio tracks. However, things were still fine when I used it with an iPhone with the AAC codec, with only a slight drop in the detail and loudness of the sound. The flexibility and adaptive nature of the sound remained, as did the pleasant and well-tuned sound signature.

The active noise cancellation on the Sony WH-1000XM5 is slightly better than on the WH-1000XM4 both indoors and outdoors, and I found the microphones inside worked a little better than before. It usually took a few seconds for the ANC to adjust properly to the environment, and noise-canceling performance gradually improved as the microphone inside adjusted to what I could hear. This helped me when I was wearing my glasses, as the ANC could adapt to even the slightest difference in the noise isolating seal.

On its own and with no music playing, the level of noise reduction was impressive, with the WH-1000XM5 sounding reasonably dim from my ceiling fan and even the majority of traffic from an open window. Outside, the headset was quite effective against wind noise. With music playing at medium volume, I could barely hear any ambient sounds.

Call quality and connection stability were good on the Sony WH-1000XM5, with the headphones working seamlessly between the smartphone and the headphones at distances of up to 4m. The LDAC Bluetooth codec stream was stable, even at a 990kbps bitrate at a reasonable distance. The Sony WH-1000XM5’s battery life is great, with ANC enabled and lasting about 28 hours on a single charge at a moderate amount.

Sony has long been a leading brand for high-end wireless headphones, and the WH-1000XM5 firmly helps to maintain that title. With reliably good battery life and connectivity, along with small improvements in sound quality and ANC performance, the Sony WH-1000XM5 is one of the best wireless headphones you can buy right now, if the over-ear form factor suits you. And you like it. Again ok with the price.

The competition in this segment isn’t much, but there are some good options to consider, including the Yamaha YH-L700A and the Bose QuietComfort 45 headphones. If you’re an iPhone user, you’ll also want to check out the (much more expensive) Apple AirPods Max. However, regardless of your source device, the Sony WH-1000XM5 are a capable and reliable pair of active noise-canceling headphones, and worth considering.