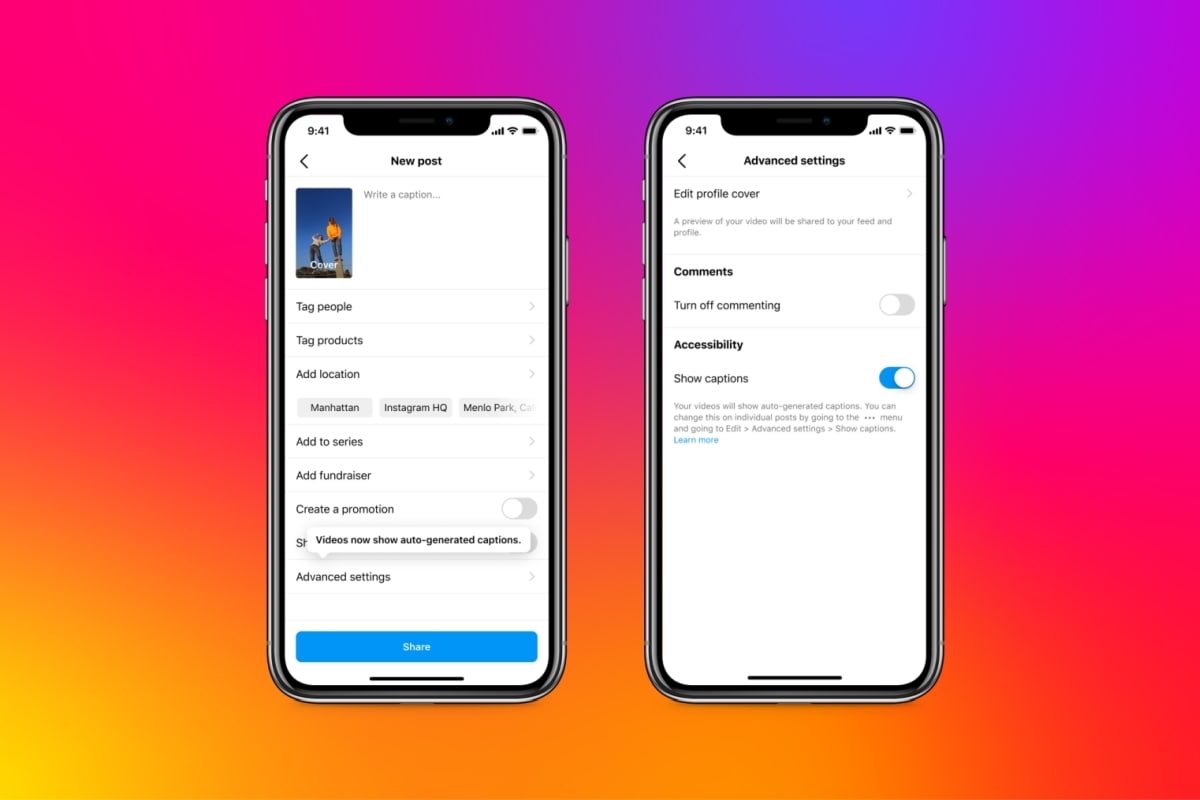 Instagram has launched auto-generated captions for videos in users’ feeds. Instagram chief Adam Mosseri said on Tuesday that the caption feature has been a long time coming. The photo-sharing app is also making encrypted one-to-one chats available to all adults in both Ukraine and Russia. It comes as part of a series of measures that Meta, previously Facebook, is taking in response to the conflict in Ukraine.

Automated captions on Instagram will be on by default for creators on the platform. Until now, creators had to manually add captions to their videos – a relatively tedious and time-consuming process. The introduction of automated captions has simplified the process while making Instagram more inclusive of listening to challenged users. It will also become easier now to watch Instagram videos on mute. While Auto Captions are on by default, users will have the option to turn them on or off Advanced Settings > Accessibility > Show Captionssimultaneously through manage captions In the menu of an individual video.

It’s been a long time coming, but we’re excited to share a new tool that empowers those in deaf and hard-of-hearing communities.

Videos on Instagram will now have auto-generated captions, where you’ll have the option to turn them off or on. pic.twitter.com/DNyzcdiPSU

The company hopes that the quality of captions will improve with use as the AI ​​learns. As of now, Instagram’s auto-generated video captions will available In 17 languages ​​at launch, with support for adding more languages. Instagram confirmed to TechCrunch that languages ​​include Hindi, English, Arabic, French, German, Indonesian, Italian, Japanese, Malay, Portuguese, Russian, Spanish, Tagalog, Thai, Turkish, Urdu and Vietnamese.

Instagram’s rival TikTok introduced automatic captions in April last year, where captions were turned on by default for its creators. It is not yet decided whether the new feature will increase user engagement on Instagram.

The Menlo Park-based social media platform has also announced That it is making available encrypted one-to-one chats in Instagram for all adults in both Ukraine and Russia. The new measure comes as part of a series of actions that Meta is taking in response to the conflict in Ukraine that includes restricting state media and increasing efforts around fact-checking.

The decision to roll out end-to-end encryption on Instagram in both countries comes as even Russian activists speaking out against the war could be at risk without the feature.

Instagram users in these countries will be alerted to the option with a notification that will appear at the top of their Direct Message inbox. The notification will inform them that they can switch to an encrypted conversion if they wish. “This update is not available for business accounts on Instagram,” the blog post adds.

using ordinary russian @MetaApps to express yourself and organize for action. We want them to keep making their voices heard, sharing what’s happening and organizing via Facebook, Instagram, WhatsApp and Messenger. pic.twitter.com/FjTovgslCe

“Ordinary Russians are using Meta’s apps to express themselves and organize for action. We want them to continue to make their voices heard, share what’s happening and share with them on Facebook, Instagram, WhatsApp and Messenger.” Organize through,” said Nick Clegg, META’s president of global affairs.