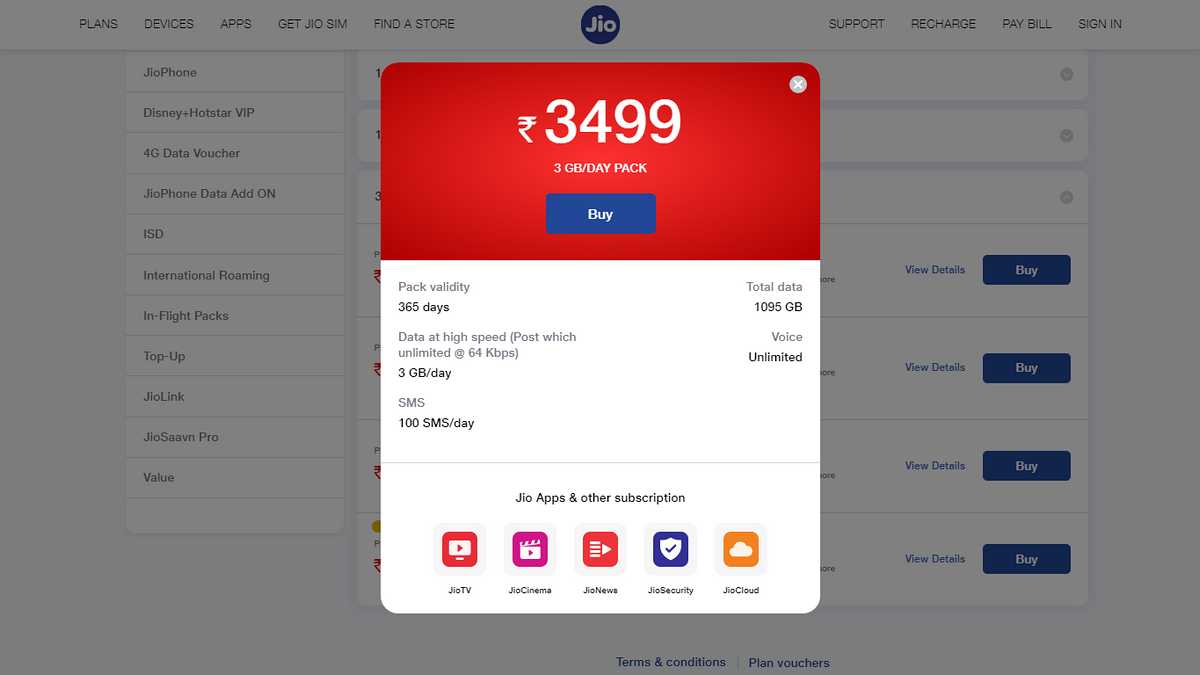 Jio Rs. 3,499 prepaid plan with one year validity has been launched. The new annual plan can be viewed on both the website and the mobile app. This 3GB per day prepaid plan is present in the list and is the most expensive plan from Jio. The new plan comes with subscription to various Jio apps and services, but no third party OTT platform unlike the company’s Rs. 2,599 annual plan that comes with Disney+ Hotstar VIP subscription.

Reliance Jio quietly added a new annual prepaid plan to its list, priced at Rs. 3,499, which makes it the most expensive plan offered by the telco now. it has been updated on both Website and MyJio mobile app. With Rs. 3,499 plan, users get 365 days validity and 3GB data per day, which is 1,095GB of total data. After consuming 3GB of data in a day, the browsing speed will drop to 64Kbps. You get unlimited voice calling and 100 SMS per day.

For subscription, Rs. 3,499 prepaid plan includes JioTV, JioCinema, JioNews, JioSecurity and JioCloud. Surprisingly, this plan does not include subscription to Netflix, Amazon Prime Video, Zee5 or any other third party OTT platform.

Till now, Jio had no annual plan that offered 3GB data per day, and Rs. 999 plan, which was the company’s most expensive prepaid annual plan, came with a validity of 85 days and similar benefits of Rs. 3,499 plan. Jio also offers a Rs. 401 prepaid plan that comes with a validity of 28 days, 90GB total data (3GB daily) and 100 SMS per day, which also includes Disney+ Hotstar VIP subscription.

Reliance recently held its 44th AGM in which the company announced a new, ultra-affordable 4G phone jointly developed with Google called JioPhone Next. The company also announced Rs. 75,000 crore investment to set up four “Giga” factories to manufacture solar photovoltaic cells, green hydrogen, batteries and fuel cells over the next three years. At the event, Reliance Industries Chairman Mukesh Ambani also shared the company’s 5G rollout plans and promised that Jio would be the first company to bring 5G service to India.