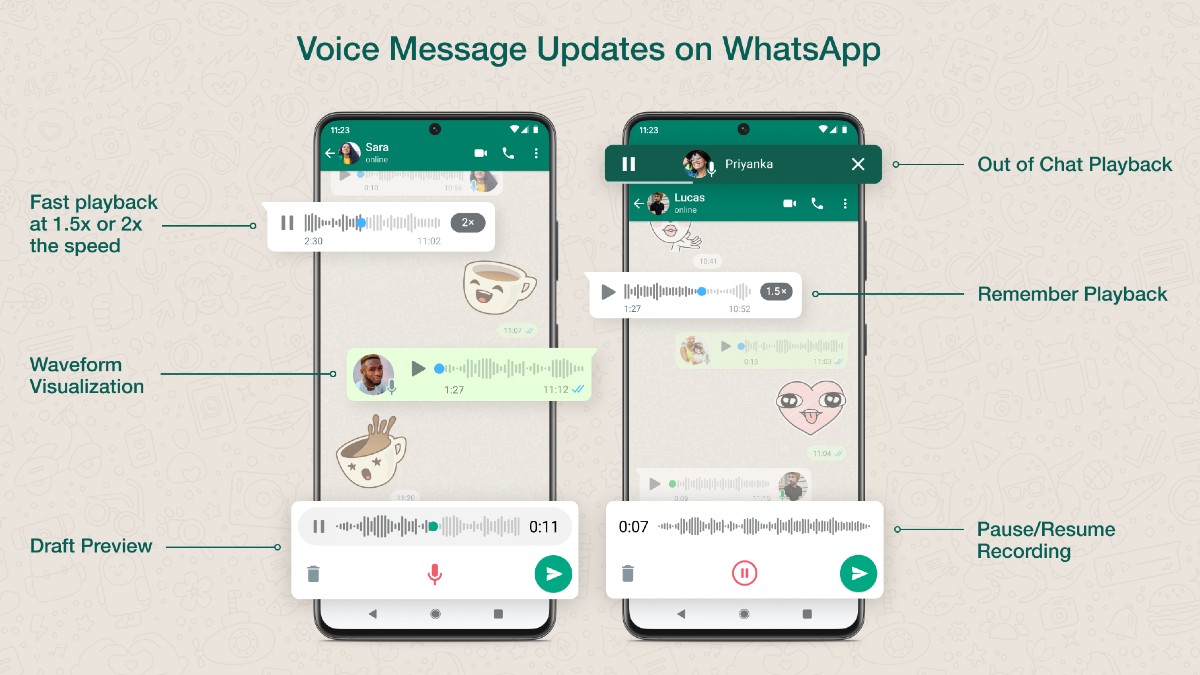 WhatsApp on Wednesday announced a series of updates to Voice Messages to make it easier for people to communicate with their contacts on the platform using Voice Notes. The update includes features such as the ability to pause and resume voice message recording, waveform visualization, out of chat playback, and draft previews that were already available to some users. WhatsApp also introduced a remember playback feature in the form of fast playback on forwarded voice messages. In addition to the feature update, WhatsApp announced that its users send an average of seven billion voice messages every day.

One of the most useful additions that WhatsApp has brought as a part of its voice message-centric update is the outside chat playback feature. It lets you listen to your voice messages outside of chat so you can multitask simultaneously or read and reply to other chats on the app. However, if you leave WhatsApp or switch to another app, your active voice message will not play in the background.

The feature, initially referred to as Global Voice Message Player, was initially spotted in testing among iOS beta testers in January. It was also rolled out to some iPhone users last month. The feature was recently seen in development for desktop users.

WhatsApp has also added the ability to pause and resume voice messages so you can collect your thoughts or resume your recording once it’s interrupted. It was rolled out to some users on iPhone in January and was recently seen in beta testing for Android and desktop users.

Like other features, WhatsApp had been testing the waveform visualization with beta testers on Android and iOS for the past few months.

WhatsApp has also brought in remember playback feature that lets you pick up your voice messages from where you return after pausing a chat.

WhatsApp is rolling out new features for voice messages to all users in the coming weeks. Hence, it will take some time to reach your device. Nevertheless, make sure you have the latest version of WhatsApp installed to get the latest experience as soon as it is available.

In addition to the new features, WhatsApp is also expanding the rollout of draft previews for voice messages so that you can listen to them before sending them to your contacts. It was initially rolled out for some users in December.

WhatsApp first launched voice messaging on its platform in 2013. It was not commonly used among users in the initial phase as people were mainly using instant messaging apps to send text messages. However, voice messaging has picked up fast on WhatsApp, which has prompted the meta-owned service to introduce new updates to improve the experience.