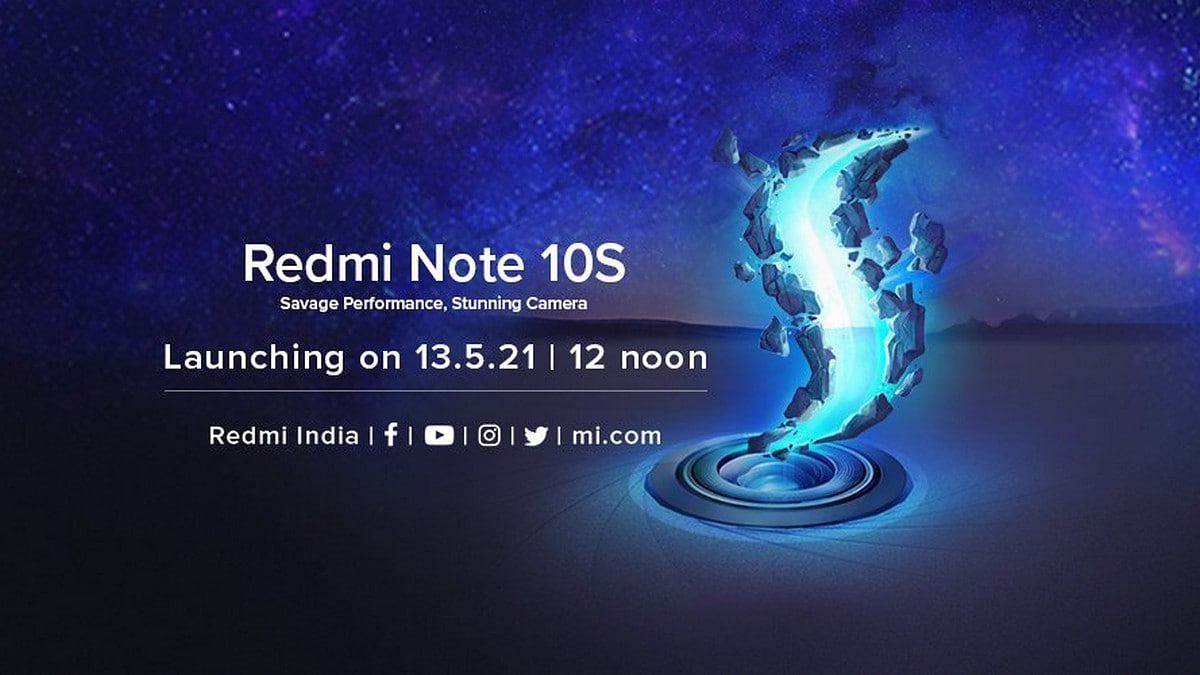 Redmi Note 10S and Redmi Watch will launch in India today, May 13 at 12 noon (noon) via a virtual event. The Redmi Note 10S will be the latest phone to join the Redmi Note 10 series that debuted in India in March this year. The upcoming Redmi Note phone is confirmed to be powered by the MediaTek Helio G95 SoC and feature a quad-rear camera setup. The phone was originally launched globally in March and is now making its way to the Indian market. Redmi Watch, on the other hand, debuted in China in November last year. It also comes with a square dial, built-in GPS, tracking for 11 sports modes, and more.

Xiaomi will launch the Redmi Note 10S and Redmi Watch in India through a virtual event that will be hosted on the company’s Redmi India YouTube channel and other social media platforms. The event will begin at 12 noon (noon) and you can watch it below.

The Indian pricing for the Redmi Note 10S has not been shared by the company, but since it will be a modified version of the Redmi Note 10, it will be priced around Rs. 12,499. The phone is expected to launch in three configurations – 6GB + 64GB, 6GB + 128GB and 8GB + 128GB. It will be offered in three colors – Blue, Dark Gray and White.

Redmi Note 10S will run on MIUI 12.5. It will be powered by MediaTek Helio G95 SoC and will feature a Super AMOLED display protected by Gorilla Glass. It will come with a quad rear camera setup that is headlined by a 64-megapixel primary sensor. The phone will house a 5,000mAh battery that will support 33W fast charging. Redmi Note 10S will have dual stereo speakers with Hi-Res Audio certification. The phone will also have IP53 rated dust and water resistance.

From the global launch, the Redmi Note 10S can be expected to come with a 6.43-inch full-HD+ (1,080×2,400 pixels) display, up to 8GB of RAM and up to 128GB of storage. In terms of optics, apart from the confirmed 64-megapixel primary sensor, the phone may come with an 8-megapixel ultra-wide camera, a 2-megapixel macro sensor, and a 2-megapixel depth sensor. On the front, there could be a 13-megapixel selfie shooter.

Since the Redmi Watch was launched in China last year, we have some ideas of what to expect. It could feature a 1.4-inch (320×320 pixels) square display with 323ppi pixel density and 2.5D curved glass protection. The smartwatch may include NFC support for on-the-go payments and an optical sensor for continuous heart rate monitoring. It may also come with a built-in six-axis accelerometer and a geomagnetic sensor for tracking activity.

The Indian variant of Redmi Watch will come with 11 sports modes. These include cycling, running, treadmill, walking, swimming and more. The smartwatch is compatible with both Android and iOS devices and is expected to pack a 230mAh battery that is claimed to provide up to 12 days of usage. from the details mentioned on event pageThe Redmi Watch will have built-in GPS/GLONASS for precise navigation, sleep monitoring, guided breathing, and over 200 watch faces.