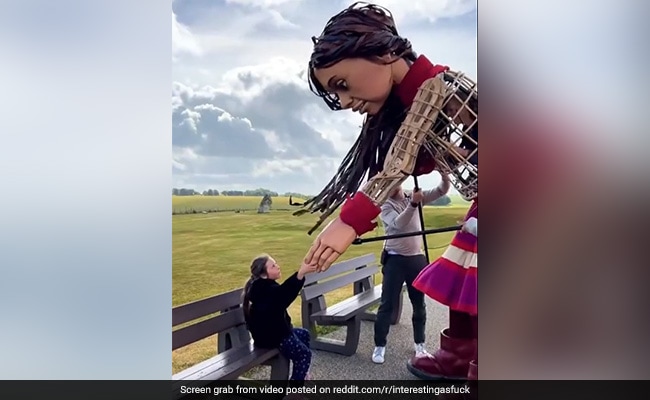 After walking thousands of miles across Europe, 10-year-old Syrian refugee puppet ‘Little Amal’ has arrived New York City To raise awareness of the plight of refugee children and to send a message for peace and aid to the displaced. The 12-foot-tall puppet is in the US for a 17-day tour. According to the New York Times, the puppeteer will tour all five boroughs with children, artists, politicians and community leaders as she begins her search for her uncle, and, her creators hope, will experience millions of hardships and beauty. helps to uncover. displaced refugees.

Portal further reported that her walk through New York City will include more than 50 shows of welcome, puppetry picking flowers at a community garden in Queens, walking across the High Bridge in the Bronx, riding the Staten Island Ferry, dancing and dancing. find themselves in the streets of Washington Heights and in the middle of a Syrian wedding procession in Bay Ridge.

Check out her arrival in New York City:

Amal, which means hope in Arabic, has already traveled some 5,000 miles across Europe, from the Syrian-Turkish border to Manchester in northwest England. She has traveled to 12 countries and met with Pope Francis – including greeting refugees from Ukraine at a Polish train station and stopping in refugee camps in Greece. abc,

According to an AFP report, the puppet was carefully crafted by the Handspring Puppet Company in Cape Town, South Africa. It is made of lightweight materials such as cane and carbon fiber so that people can operate it for extended periods in various conditions.