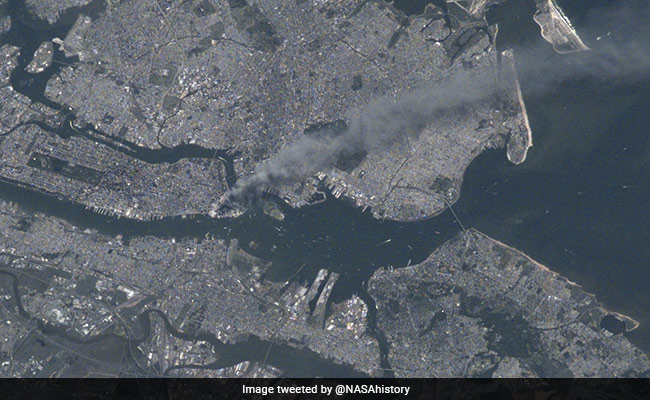 The photo shows huge plumes of smoke rising from Manhattan.

To commemorate the 21st anniversary of the 9/11 terror attacks, NASA on Sunday shared a photo on Twitter of one of its astronauts taking New York City from space after a hijacked plane crashed into the city’s iconic Twin Towers. Were. Huge plumes of smoke are seen from Manhattan shortly after two planes crashed into buildings in an image taken by astronaut Frank Culbertson.

“On the 21st anniversary of that dreadful day, we honor the victims and heroes of the 9/11 terrorist attacks,” the US space agency said in a social media post. “The attacks of September 11, 2001, were a national tragedy, resulting in a staggering loss of life and a significant change in American culture. Every year, we stop and never forget,” it wrote in a separate Is release,

Take a look at the image below:

On 11 September 2001, @NASA Astronaut Frank Culbertson took this photo from the ISS of smoke rising from the Twin Towers in New York City. On the 21st anniversary of that dreadful day, we honor the victims and heroes of the 9/11 terrorist attacks.

In the press note, NASA also shared the words of astronaut Frank Culbertson, who was aboard the International Space Station (ISS) at the time of the attacks and was the only American in the crew. He said the smoke he captured on camera looked like a “strange flower”.

“After reading one of the news articles we just received, I believe we were looking at New York at the time of or shortly after the collapse of the second tower,” said Mr. Culbertson.

“It’s terrifying to see smoke pouring from wounds in one’s own country from such a spectacular vantage point. The dualism of being on a spacecraft dedicated to improving life on Earth and destroying life by such deliberate, horrific acts It’s shaking the mind no matter who you are,” he said.

On September 11, 2001, the plane crashed into the World Trade Center in New York City, the Pentagon in Washington DC, and an area in Pennsylvania. The terrorist attacks claimed the lives of nearly 3,000 people and injured countless others.

On Sunday, US President Joe Biden, marking the 21st anniversary of the September 11 attacks, laid a wreath at the Pentagon at a condolence ceremony held under steady rain.

In a speech outside the Pentagon, he said, “The American story changed that day. What we cannot change, will never change, is the character of this country.” of grace, strength and flexibility,” Mr Biden said.