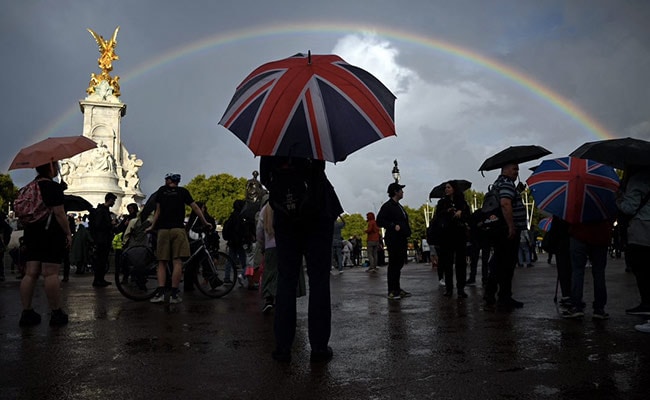 A rainbow is seen outside Buckingham Palace on Thursday. (AFP photo)

As news of Queen Elizabeth’s death was announced, rainbows appeared in various places, including Windsor Castle, where the Union flag was lowered, and outside Buckingham Palace where crowds had gathered. Britain’s longest-reigning monarch died on Thursday at the age of 96 at Balmoral Castle in Scotland. Born Elizabeth Alexandra Marie on April 21, 1926, in London, she was the eldest child of the Duke and Duchess of York. Elizabeth formally assumed the throne in 1952.

Vivid rainbows temporarily lifted spirits, but with the announcement of the news of the earthquake on Thursday, the mood turned bleak. A tearful crowd sang “God Save the Queen” outside Buckingham Palace.

Some cried as the flag was lowered at the Queen’s London residence, before a silence fell over the crowd.

Hundreds of people gathered outside Buckingham Palace as it rained heavily after it was announced that doctors had placed the monarch under medical supervision at their Scottish estate, Balmoral.

The royal family posted a statement on their official site on Thursday, saying: “The Queen passed away peacefully at Balmoral this afternoon. The King and Queen Consort will be at Balmoral this evening and return to London tomorrow.”

Tributes poured in from around the world. Politicians and politicians took to Twitter to mourn the passing of the British Queen.

“During my visits to the UK in 2015 and 2018, I had memorable meetings with Queen Elizabeth II. I will never forget her warmth and kindness.” During one meeting she showed me the handkerchief that Mahatma Gandhi gifted her at her wedding was given in I will always cherish that gesture,” Prime Minister Narendra Modi tweeted.

“In each one of us there is a pain in our hearts at the passing of our Queen, a deep and personal sense of loss – far more intense than we expected, perhaps,” he said.

Following the death of Queen Elizabeth, her eldest son Charles became the new monarch. A 10-day mourning has been announced on the death of Elizabeth II, who was the official head of state in 15 countries.